bluebird bio (BLUE 0.93%) continues its flight upward. Monday it advanced on no apparent news, and it's up 11.5% today as of 3:45 p.m. EDT. Today's move at least has some news tied to it; Goldman Sachs put the company on its "Americas Conviction List."

The opinion of one investment bank really shouldn't matter all that much, but investors have been leery of Bluebird since it topped out last year. The biotech will take any additional vote of confidence it can get. 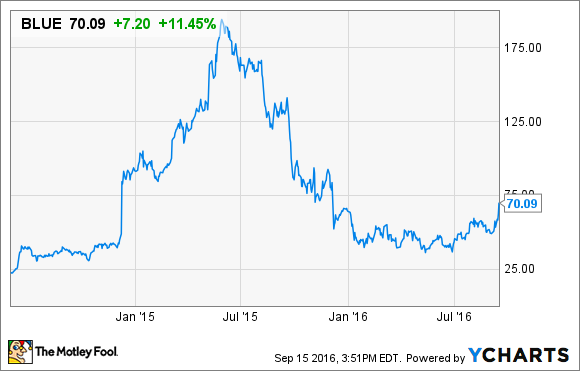 More specifically, LentiGlobin appeared not to work in some harder-to-treat patients with a blood disorder called beta thalassemia, or in some patients with sickle-cell disease. The company hypothesized that increasing the average number of copies of the gene added per cell would increase expression of the protein, and therefore increase the cure rate.

Last week, Bluebird said it had figured out a way to increase the copy number, and started a clinical trial using the new process.

It'll be a while before we have clinical data on whether the new manufacturing process produces a higher cure rate, but we may get some data on the manufacturing process -- copy number, expression levels, etc. -- at the American Society of Hematology meeting in early December. That data could provide even more confidence that Bluebird is on its way back toward the highs set last year.

Brian Orelli has no position in any stocks mentioned. The Motley Fool recommends Bluebird Bio. We Fools may not all hold the same opinions, but we all believe that considering a diverse range of insights makes us better investors. The Motley Fool has a disclosure policy.