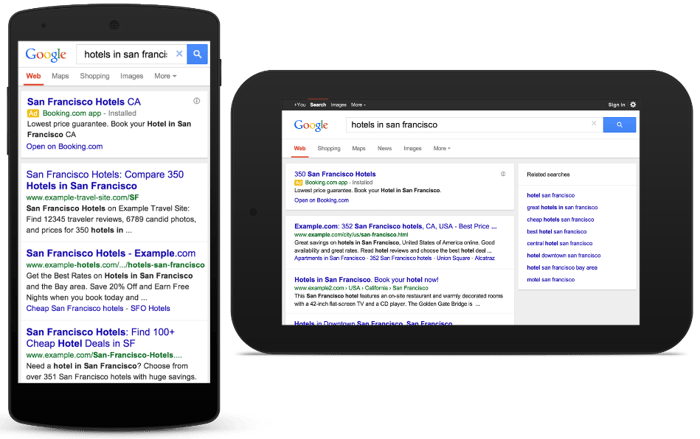 App-install ads have been one of the most successful products for Facebook (NASDAQ:FB) since the company introduced the ad units in October 2012. In April, the company announced that it's been responsible for 2 billion app installs in those three-and-a-half years.

But Google -- the Alphabet (NASDAQ:GOOG) (NASDAQ:GOOGL) subsidiary -- has made several improvements to its app-install ads over the past few years, and it recently announced a cumulative 3 billion app installs. In 2014, Google allowed advertisers to target specific search terms with ads for pages within their apps -- think hotel or flight booking. And earlier this year, Google opened app-install ads to iOS apps, sending installs surging from 2 billion in May to 3 billion this month.

Opening up search advertisements on Google to both Android and iOS apps gave marketers a lot more inventory to bid on. That has the potential to drive down app-install ad prices with an influx of supply.

Google continues to experience a decline in average ad prices with its cost-per-click on its owned and operated properties declining 9% year over year last quarter. That decline is due largely to the growth of YouTube, which commands lower ad prices than its main search ads business. App-install ads likely produce a positive impact on average ad prices as it invites more bids on Google's search ads. At the very least, app-install ads are providing incremental ad revenue for Google.

The lack of impact on Facebook's ad prices is explained by an interesting supply and demand problem faced by app developers. The supply of apps is bigger than it's ever been, but the demand for apps isn't getting any bigger.

People spend 80% of their time on mobile using just three apps, and the average user uses just 25 apps per month, according to comScore. The concentration of time spent in apps is up significantly from 2014, when 75% of time was spread across a user's top four apps.

As a result, developers are more willing to pay up to get their apps installed on more smartphones. That means the influx of supply from Google's expansion into iOS app installs isn't having a huge impact on ad prices.

With 1 billion installs in the last four months, Google is up to a 3-billion-installs-per-year rate. For reference, Citi analysts expect Facebook to generate just 1.15 billion installs this year.

Citi also expects Facebook to fetch an average price of $3.40 per app install. If Google can command the same price per install, it stands to generate more than $10 billion just from app-install ads. Add to that the revenue it generates from the Play Store, and it has quite a big business on its hands. For reference, Google generated $74.5 billion in revenue last year.

App-install ad revenue won't be completely incremental, however. A lot of app-install ads will replace other ad units. But, as previously mentioned, the new ad unit invites more marketers to bid on Google's ad inventory, increasing the average price per ad. Google's revenue from its own websites is up 22% so far this year.

It's safe to crown Google the new king of app-install ads, but Facebook investors don't need to worry about one of its biggest money makers. The company's management loves to downplay the importance of the ad units, and it's now focused on video ads more than anything else.

What's more, CFO Dave Wehner told analysts on Facebook's second-quarter earnings call that ad load -- the number of ads users see in their News Feed -- is nearing saturation. That will have a negative impact on supply growth, but a positive impact on ad prices as overall demand continues to increase. As such, Facebook investors can expect average ad prices to continue climbing, even while Google takes a big share of app-install ads.