A recent PwC report identified a $6.3 billion opportunity in drones. That figure could be conservative. 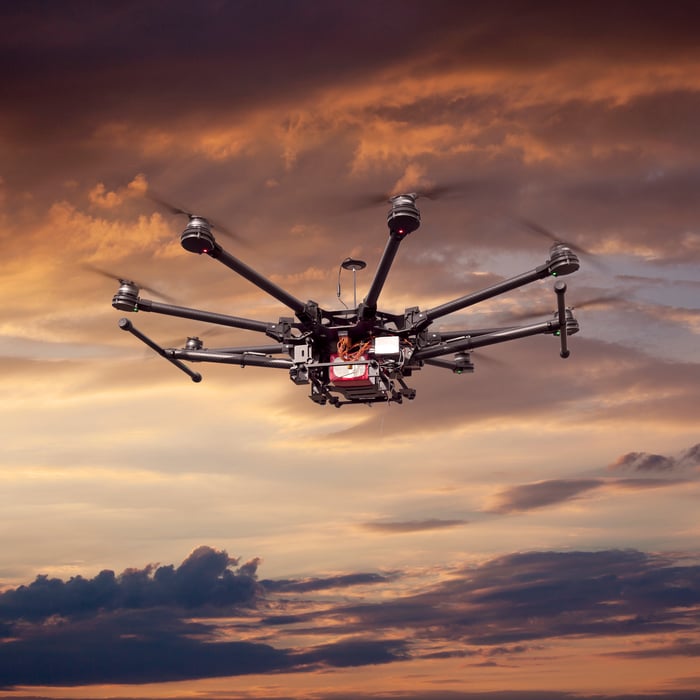 Drones are coming -- be afraid, be very, very afraid! While the term drone typically conjures images of the Terminator franchise's sinister Skynet corporation, or modern-day military warfare, the reality is less horrifying, but potentially more lucrative.

Drones, also known by the less sinister name unmanned aerial vehicles, or UAVs, aren't coming -- in fact, they're already here. Commercial drones have been in use for more than 30 years, according to a PwC report. UAVs were first used in the early 1980s to spray pesticides on rice fields in Japan as a solution to expensive helicopters.

The technological capabilities of drones have improved, and production costs have fallen. As a result, PwC expects the value of drone-powered solutions to all applicable industries at a staggering $127 billion dollars. Of that total, $6.3 billion is projected to be in the telecommunications industry, and could revolutionize the industry by ushering in a cost-effective way to maintain critical networks.

Drones could save these companies billions

PwC notes that drones can be a key part of network infrastructure maintenance for telecoms. Last year, T-Mobile US's (TMUS -0.28%) Dutch counterpart took delivery of a fleet of drones from Aerialtronics. Citing speed, cost, and safety as driving factors for the purchase, Jeffrey Leentjes, network specialist at T-Mobile Netherlands, stated:

T-Mobile uses the Aerialtronics drone as it offers a safe, cost-effective and easily deployable alternative to traditional methods. The HD camera, equipped with thermal sensors and transmitters to share the information, produces high resolution images with the cameras even showing the part numbers which may need replacing. Another benefit of drones is that it can often operate in poor weather conditions such as rain and high winds.

Verizon (VZ -0.20%) is looking to ramp up fifth-generation, or 5G,  capabilities in the upcoming years in addition to continuing to "densify" its 4G LTE in order to continue its network lead. Last fiscal year, the "big four" wireless carriers spent a combined $46.4 billion on total capital expenditures (capex).

Capex spending will only increase

As the table above shows, Verizon's not the only telecom spending big money on capital expenditures. AT&T (T 0.06%) expensed $19.2 billion last fiscal year, more than its bigger wireless competitor Verizon, which expensed $17.8 billion. AT&T's recent entry into Mexico by its purchase of DirecTV and its Latin-American assets, and its purchase of Iusacell and Nextel Mexico to create AT&T Mexico, should increase its need for maintenance capex for years to come.

Sprint (S) and TMobile US spend less than the two leaders, but are aggressively looking to expand network coverage. If anything, the cost-effectiveness of drone usage may encourage Sprint and TMobile to become early adapters. Drones would be a natural progression for TMobile's change-oriented CEO, considering that its German parent is already using the technology.

It's important to note that capital expenditures includes new long-term asset and equipment purchases, replacement assets, and capitalized labor costs. Of the three, drones will most likely initially be utilized to increase labor cost efficiencies. As such, it's easy to dismiss the report's $6.3 billion estimate as wishful thinking until you remember that this is only four companies out of the hundreds of telecommunications providers in the world, and this is an annual figure.

PwC's figure could be conservative

In the report, PwC's vision of the future drone applications may be a game changer for both the UAV and telecommunications industries. PwC notes Nokia (NOK 0.32%) is using drones for line-of-site testing between radio towers to identify obstructions, power needs, and antennae sites and placement. In this application, drones are not simply a maintenance product, but rather a key part of infrastructure buildout and network planning.

The last application that PwC envisions is drones as an actual part of the network itself. Instead of the antiquated cell-on-wheels technology -- portable cell towers delivered via trailer (on the left) -- PwC's posits drones could broadcast these signals. Cell-on-wheels has typically been used to accommodate a huge surge in demand such as the Super Bowl, or concerts.

More recently, however, there's been a push to deliver internet outside of towers by the biggest names in technology. Alphabet's Project Loon seeks to deliver internet by weather balloon on a long-term basis, and iFacebook's Mark Zuckerberg is actively working on a drone codenamed Aquila to deliver Internet access. It's becoming increasingly apparent that drone technology will revolutionize telecommunications.