Could a new design give SunPower a leg up in the power plant business? Management hopes so.

SunPower is trying to improve its utility power plant product now that it has a growing rooftop solar business. Image source: SunPower.

High-efficiency solar panel maker SunPower Corporation (SPWR 3.64%) unveiled its new Oasis 3 power plant design on Tuesday and included a drone designed to make planning solar power plants easier. The product is an improvement on the Oasis product SunPower has been installing since 2010 with over 3 GW in the field.

Oasis 3 looks similar to Oasis 2, except that it's much wider. But it's the products in the ecosystem around the panels that could define the future of SunPower.

Solar companies today are competing with each other on pennies per watt, or a tenth of a point of efficiency at times. So, a small improvement can make a big difference when it comes to the end cost of electricity coming from a power plant.

When looking at SunPower's Oasis 3 product, you can see those incremental improvements that may eventually add up to big wins for the company.

The most notable is the width of a single array of panels. Instead of a single panel being laid lengthwise on the tracker, the new design has four panels laying widthwise to make a much wider array. This means the same number of MW of solar power plants will have fewer mounts, fewer moving components, and will be easier to clean (which I'll cover in a moment).

SunPower also pointed to the "unlinked tracker," which improves the efficiency of the system and allows it to be built on hillier terrain. 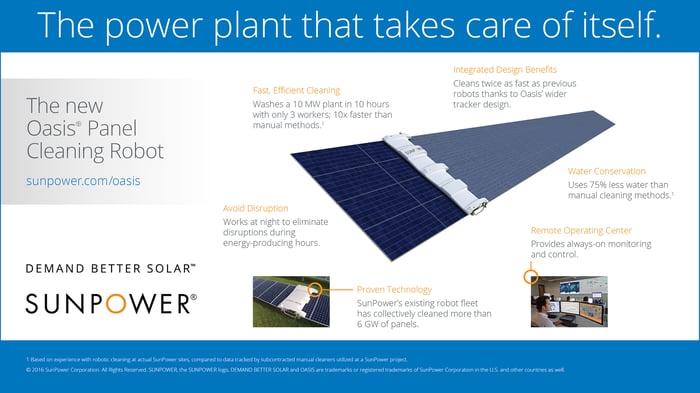 The robots are taking over

A key improvement for Oasis 3 is the cleaning system. SunPower has had an automatic cleaner since it acquired Greenbotics in 2013, but this will take that product to another level. The wider design means the robot needs fewer passes to complete a cleaning cycle, which will lower labor costs for cleaning.

SunPower claims that 10 MW can be cleaned by three workers in 10 hours. The idea would be to clean solar panels at night to optimize energy production, and with that low amount of labor, a single crew could clean a 100 MW power plant in just 10 nights. And that's not all the robotics team has been up to.

Drones have been something the renewable energy industry has talked about for a while, but how they would be used has been undecided. SunPower's Oasis GEO, also announced Tuesday, is the company's vision for more efficient planning and siting of solar projects.

The Oasis GEO drone would fly over an area and map the landscape. It would then automatically optimize a solar power plant design for the site, something that's been mostly manual until now.

This product is intended to be sold to third-party developers, showing SunPower's strategy shift in the last two years. SunPower was formerly moving into building its own power plants, but after a rough couple of years, it has realized that its advantage may be in offering technology to developers who will take on project risk themselves.

Supplying developers with plant design solutions and a complete Oasis design will also allow SunPower to expand its presence in international markets. Management has said the company will focus its internal efforts on the U.S. and Latin America, but these complete solutions will be sold overseas.

It's also notable that all of these Oasis solutions, including the robotic cleaning, will work with SunPower's high-efficiency E-Series panels or the lower-cost P-Series panel. Depending on the economics and rates of return in each end market, there are different solutions that might make sense.

None of this week's announcements in and of themselves are going to turn SunPower's fortunes around, but they're all small pieces in the company's improving cost-effectiveness in solar. Squeezing every bit of power out of each power plant will give the company a small advantage over competitors who don't have the same holistic design approach. Long term, that should lead to a sustainably profitable solar company, but that may be easier said than done.

This is a quick overview of the new products, and I'll be at SunPower's event on Tuesday to see Oasis 3 up close. I'll also get a chance to talk with the management team about how they'll impact the company long term. Check back to fool.com later in the week for insight from that event.

Travis Hoium owns shares of SunPower. The Motley Fool has no position in any of the stocks mentioned. We Fools may not all hold the same opinions, but we all believe that considering a diverse range of insights makes us better investors. The Motley Fool has a disclosure policy.