Not moving fast enough to adjust to the realities of solar in 2016 could come back to haunt SolarCity. 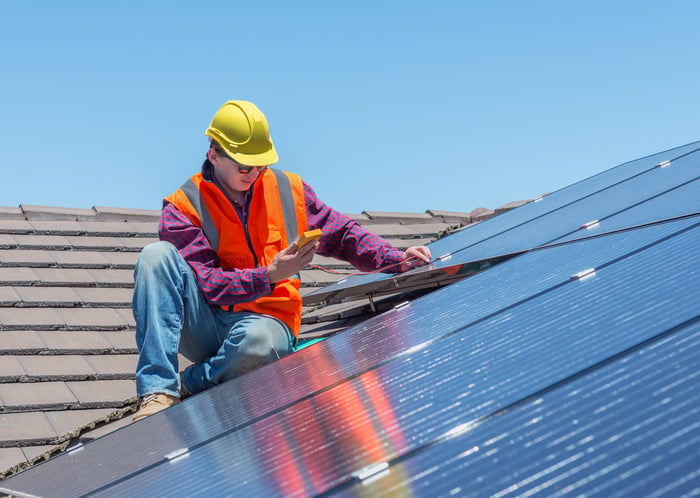 There hasn't been a lot that's gone right for SolarCity Corp (SCTY.DL) in 2016. The stock is down 66% this year and without a bailout from Tesla Motors (TSLA -1.44%) the drop may have been even further.

How did a company that was once a high flyer in the solar industry fall as far as SolarCity did? It may be an easier answer than you think.

SolarCity has long been a one-trick pony when it comes to selling solar-power systems. It would give customers a few options, but it would steer them to solar leases or power purchase agreements (PPAs) that would allow SolarCity to own the rooftop solar-power system in exchange for a long-term contract with customers.

One reason the leasing market was so successful is that solar-power systems could cost $30,000 or more to install. Financing wasn't readily available from banks, so paying for the system was tough, and tax benefits for going solar were difficult to utilize. SolarCity took care of all of those problems, offering customers a simple financing solution with one payment in a long-term contract.

The status quo was great for SolarCity until 2016 when everything changed. Loans from solar finance company Mosaic and SunPower (SPWR -4.64%) partner Admirals Bank started to become more common and cost effective. Smaller regional and local installers partnered with financing partners and panel producers to offer compelling products to customers, who also are now more likely to be able to use tax benefits from solar.

Leases and PPAs are slowly losing market share to loans and SolarCity was slow to adjust.

This summer, SolarCity did start offering solar loans, but it may be too late for them to be successful. The company's sales force and cost structure is built for third party financing, not selling to customers for the lowest price possible. SolarCity also isn't used to giving customers choice on what's installed on their roof, something customers may demand if they're buying a solar-power system.

SolarCity also doesn't (yet) have much differentiation versus competitors besides a monitoring solution that's similar to every other solar company. SunPower, on the other hand, can offer customers higher efficiency solar panels and a more integrated design because it has better technology and designs the complete solar solution. That's one reason SolarCity has reduced guidance for 2016 and SunPower has said it will take market share.

Will SolarCity be able to come back?

The mistake of not having a compelling solar loan product has hurt SolarCity this year, but it may be the company's core structure that becomes its biggest challenge going forward. With loans and cash sales, solar companies are competing with technology and/or price. SolarCity uses the same components as most local installers in many cases, so price will become a big differentiator. And SolarCity simply doesn't have the low cost structure that a smaller installer might have.

For years, people within the solar industry have been saying that long-term the residential solar market will look more like the home construction and repair markets with smaller local or regional companies dominating the industry, not national installers. It's starting to look like that prediction is coming true and it may be too late for SolarCity to adapt given what it's spent building out its national solar team.