Who's down? Why are they down? And which of these stocks can get back up? 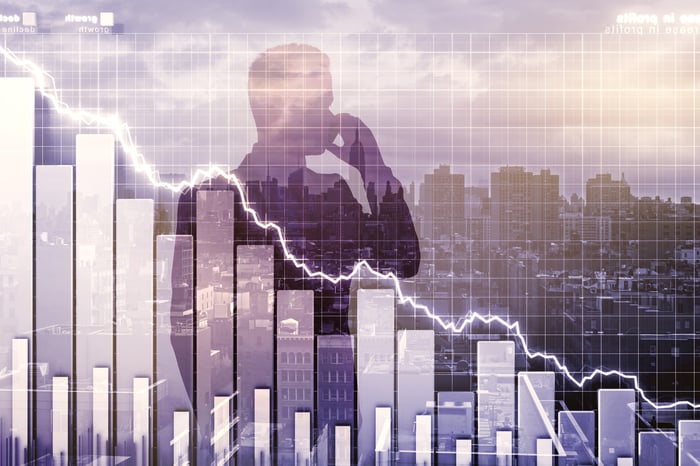 Stocks are down in September. Is it time to call your broker? And if so, to sell or to buy? Image source: Getty Images.

With just five days to go, September is almost over -- and investors will soon sigh with relief.

It's a market truism that September is the worst month  for stock performance. According to the financial data crunchers at MoneyChimp.com, stocks lost money in September in 37 of the past 66 years, producing average monthly returns of negative 0.68%. (In case you're wondering, December is the best month for stocks -- up in 49 out of 66 years, with returns averaging 1.54%. That's why they call it the month of "the Santa Claus rally.")

That means that this particular September, investors are getting off easy. Sure, stocks are down this month -- but only by about 0.28% . With any luck, we'll make it through the rest of this week without too much more damage done.

All that being said, not all investors are escaping September unscathed. Here, for your schadenfreude-ian pleasure, are three of the worst performing stocks in September (so far ):

Heading up our list of bottom-trawling stocks this month is truckmaker Oshkosh (OSK -0.59%) -- and they made it in just under the wire. On Friday, Oshkosh stock tumbled 10% in response to new guidance for fiscal 2016.

Oshkosh, which had been expected to perform mighty well on the back of a big Pentagon contract to build Joint Light Tactical Vehicles for the military, instead warned investors that while it expects to record $6.1 billion to $6.2 billion in total revenue this year, earnings will be no better than $3 a share -- and could be as bad as $2.85 per share. Considering that analysts had been expecting Oshkosh to report $3.56 per share in profits this year, you might expect investors to throw a hissy fit over this news.

Which, in fact, they did. Oshkosh lost all its gains from earlier in the month, and is now down 5.7%  for the month.

Shifting gears from trucks to grocery carts, Kroger (KR -1.74%) is another name-brand stock that got dropped into the discount bin this month. Up and down all month long, the stock is currently heading for a 5% loss. But whereas Oshkosh's stock suffered from a pessimistic prediction of future results, it's Kroger's actual results that have investors worried.

Q2 2016 saw Kroger keep revenues growing. But they were up only a bare 4% (less than half of which came from same-store sales), and at great cost: A 9% decline in earnings per share. Kroger blamed an unusual pension charge for the decline in earnings, and said profits would have risen roughly in line with revenues (up 5%) without that charge. That said, the company's net profit margin did decline, and with food prices continuing to get cheaper, it's getting harder for Kroger to find room for a profit margin.

Management says it now expects only a 1% or 2% rise in same-store sales for the year as a whole, and for profits to grow only 4%.

Salesforce has seen its stock sink 11.4%  since the month began. Market commentators are blaming this on rumors  that Salesforce might buy Twitter (TWTR) -- and perhaps overpay. And yes, Twitter probably had something to do with it. But consider: Friday's 5.6% decline in Salesforce stock was less than half the stock's total losses for the month. And a Twitter acquisition is only a possibility -- not a certainty.

Salesforce's bigger problem may be the numbers it reported back at the end of August . When Salesforce's fiscal Q2 2017 earnings came out, they revealed a big 25% jump in revenues for Salesforce, and an even bigger 33% rise in "adjusted net income." Cash from operations, however, plunged 18%, while capital spending at the company jumped 48% (according to data from S&P Global Market Intelligence). As a result, Salesforce generated real free cash flow of only $155 million for the quarter -- barely 67% of the $230 million in "earnings" it claimed on its income statement, and a marked slowdown from cash production a year ago.

That said, with $1.55 billion in real cash profits generated over the past year, free cash flow remains Salesforce's strong suit -- for the time being. Valued on free cash flow, Salesforce stock costs just 31 times earnings, and is much less expensive than its 217 P/E ratio makes it seem. If Salesforce turns around and resumes growing cash in coming quarters, investors who sold off the stock this month will wish they had stuck around just a bit longer.

Fool contributor Rich Smith does not own shares of, nor is he short, any company named above. You can find him on Motley Fool CAPS, publicly pontificating under the handle TMFDitty, where he's currently ranked No. 284 out of more than 75,000 rated members.