Please ensure Javascript is enabled for purposes of website accessibility
Log In Help Join The Motley Fool
Free Article Join Over 1 Million Premium Members And Get More In-Depth Stock Guidance and Research
By Dan Caplinger - Jun 10, 2019 at 10:52AM

Investors were pleased with a favorable resolution to trade disputes with Mexico.

Monday morning saw a continued rise in the stock market, as Wall Street reacted positively to an agreement over the weekend that forestalled the U.S. imposition of new tariffs against Mexico. Investors have also watched signs that the domestic economy is weakening and believe that the Federal Reserve will have to respond by cutting interest rates, which they think will be positive for the stock market. As of 10:30 a.m. EDT, the Dow Jones Industrial Average (^DJI 1.34%) was up 171 points to 26,155. The S&P 500 (^GSPC 2.02%) gained 22 points to 2,896, and the Nasdaq Composite (^IXIC 2.76%) climbed 113 points to 7,855.

Merger and acquisition activity came to the forefront to begin the week as several high-profile companies announced deals to make major combinations. Defense contractor Raytheon (RTN) received an offer from industrial peer United Technologies (RTX 2.67%) in what could be a massive acquisition that has implications for both military and commercial aerospace, as well as other industrial businesses. Meanwhile, in technology, Tableau Software (DATA) found itself the target of a deal from pioneering software-as-a-service provider salesforce.com (CRM -0.24%). 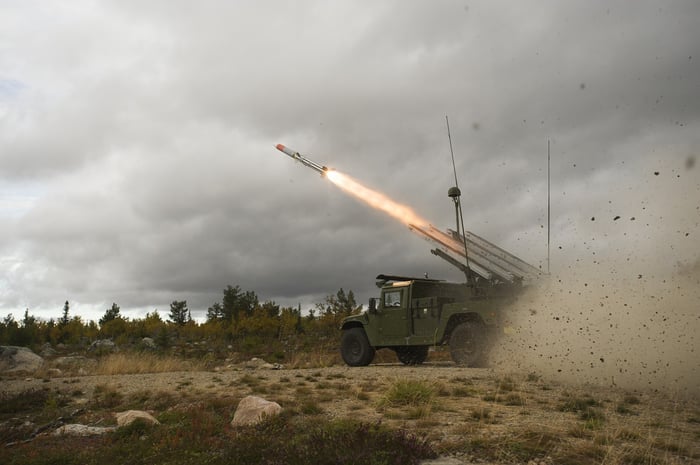 Under the terms of the deal, Raytheon investors will receive 2.3348 shares of the combined company for every Raytheon share they own. That puts about 43% of the value of the post-merger company in the hands of Raytheon shareholders, with the remaining 57% sticking with United Technologies investors.

The timing of the anticipated closing of the merger reflects the fact that United Technologies is already going through some significant corporate restructuring on its own. United Tech still expects to break off its Otis elevator and Carrier heating and air conditioning businesses as separate companies during the first half of 2020, with the Raytheon merger expected to follow that separation closely.

The two companies see huge gains from the merger, including $1 billion in annual cost savings by the fourth year following the combination, new revenue opportunities from combining technology, and expected return of $18 billion to $20 billion in capital to shareholders during the first three years of combined operations. If Raytheon and United Technologies prove to have as complementary a corporate and business structure as they believe now, then the combined business will challenge other industry leaders in a host of areas.

A big deal for big data

Tableau Software made an even bigger splash in Monday morning trading, with its shares soaring 33% following the announcement that Salesforce would pay $15.7 billion for the data analytics specialist. The move highlights the value of companies with big data expertise, as well as the especially useful niche that Tableau serves with its data visualization platform.

Tableau shareholders are set to receive 1.103 shares of Salesforce for every Tableau share they own, under the terms of the agreement the two companies reached. Salesforce expects to complete the transaction during its fiscal third quarter, implying a closing by October. Tableau's founders have already committed their shares to the proposed exchange offer that Salesforce will implement to consummate the deal.

As the two companies see it, the acquisition will bring together the top customer relationship management (CRM) provider with the top analytics platform. Tableau CEO Adam Selipsky said, "Tableau's intuitive and powerful analytics will enable millions more people to discover actionable insights across their entire organizations" as a result of being part of Salesforce. The CRM giant's co-CEOs also added their belief that Salesforce shares a similar vision with Tableau in helping customers use their data more effectively.

The move in Tableau's share price shows the premium that larger tech companies have had to pay lately to tap into higher-growth segments of the industry. Some of Tableau's peers also saw their shares climb in hopes of making deals of their own, and it'll be interesting to see whether Salesforce's competitors step up to the plate with acquisition bids in the near future.