Clean Energy Fuels Corp. and Chart Industries are far more likely to profit from the growth in natural gas vehicles.

While natural gas isn't likely to ever be a mainstream fuel for automobiles, it has proven to be an excellent alternative to gasoline and diesel for medium- and heavy-duty vehicles. Not only is natural gas typically cheaper than traditional oil-based fuels, it also produces significantly lower tailpipe emissions, helping urban areas reduce smog and air pollution, and reducing greenhouse gas emissions that have been linked with climate change.

For the few companies that focus on this segment, there's a pretty huge opportunity for growth. Westport Fuel Systems Inc. (USA) (WPRT 4.04%) is a key technology leader in this space, developing injector technology that allows engines to run on natural gas reliably and with enough power to handle the loads and stresses of commercial applications. But its stock has made for a terrible investment: 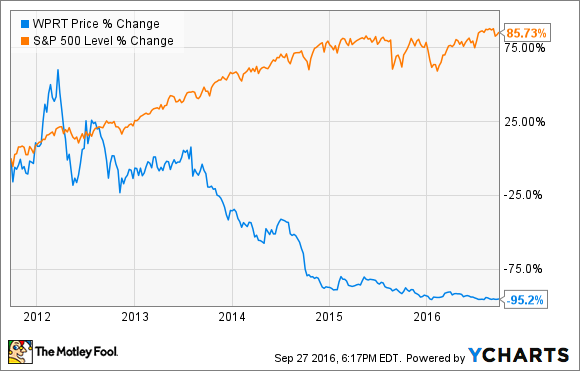 Westport could still turn things around -- I'm not writing the company off just yet -- but Chart Industries, Inc. (GTLS 2.29%) and Clean Energy Fuels Corp. (CLNE 1.40%) are far better investments as things stand today. Here's a closer look at why.

Why Westport has struggled

One of the challenges that Westport continues to deal with is the reality that the company is trying to disrupt the long-established diesel engine industry and at a time when diesel prices are nearly as low as they've been in more than a decade. And while natural gas is still the cheaper fuel, Westport's technology adds tens of thousands of dollars as compared to a comparable diesel-powered vehicle, cutting into the benefit of cheaper fill-ups.

That's severely slowed the rate of adoption to natural gas, particularly in the class 8 heavy-duty trucking segment, with its 200,000-plus new vehicles sold each year. Furthermore, cheap diesel has played a role in slowing development of technology with key Westport OEM partners, which essentially control the time frame for taking Westport's injector technology to market.

This has weighed heavily on Westport's results over the past few years, forcing the company to severely cut its costs in an effort to reduce cash burn and get to cash flow breakeven while the market improves. As things stand today, the company continues to burn through its cash, with operations consuming nearly $29 million in the first half of 2016.

Clean Energy Fuels, like Westport, is one of the few pure-play investments in the natural gas transportation space. But beyond that, they are very different companies. Westport relies on vehicle sales to drive its results, as nearly all of its revenue is tied to vehicle owners and fleet operators buying a natural gas vehicle.

This is why Clean Energy has been able to see its revenue and EBITDA (earnings before interest, tax, depreciation, and amortization) continue to grow in recent years, while Westport has struggled and seen its business results deteriorate: 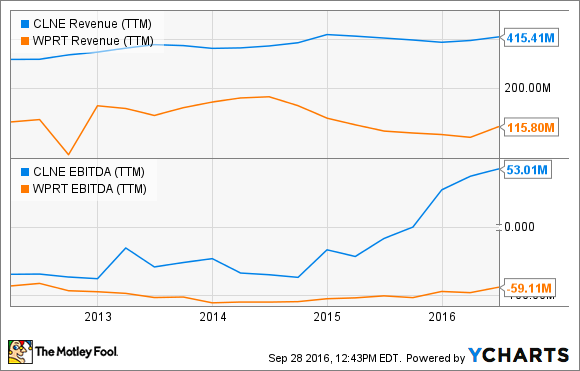 Cheap oil and a weak global economy have slowed sales of natural gas-powered vehicles over the past couple of years, and that's hurt Westport. Clean Energy Fuels, on the other hand, has done well because it continues to sell fuel to the thousands of natural gas vehicles its customers continue to operate, while still benefiting from the growth that even reduced natural gas vehicle sales is driving in fuel consumption.

Chart is diversified and (much) less risky

Chart Industries has been around for over 100 years and manufactures equipment for use in multiple industries including energy, healthcare, food, and others. Chart's products are used to process, store, and handle cryogenic gases and liquids for applications ranging from liquefying natural gas to storing cryogenic samples to respiratory therapy.

And while much of the excitement around Chart as an investment in recent years was centered around the potential for expanded use of natural gas around the world, the company's exposure to multiple industries gives it a base of business that has allowed it to ride out the cyclical downturn in demand for its natural gas-related equipment.

Furthermore, Chart is solidly profitable on a cash flow basis, even at the current revenue level, which is down almost 20% from the pre-downturn peak: 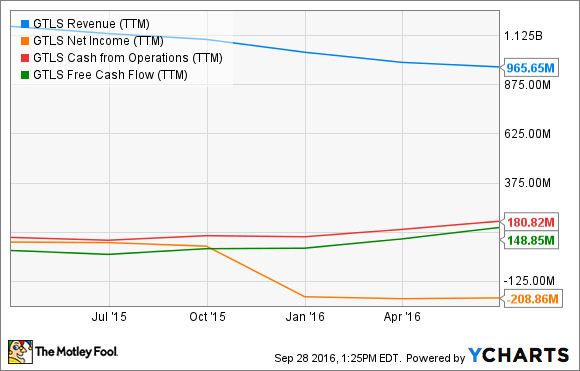 Avoiding unnecessary risk is the biggest key to beating the market

It's easy to look at Westport's current share price and see huge opportunity, particularly when compared to Clean Energy and Chart, which have both seen their stock prices climb sharply from their lows in January: 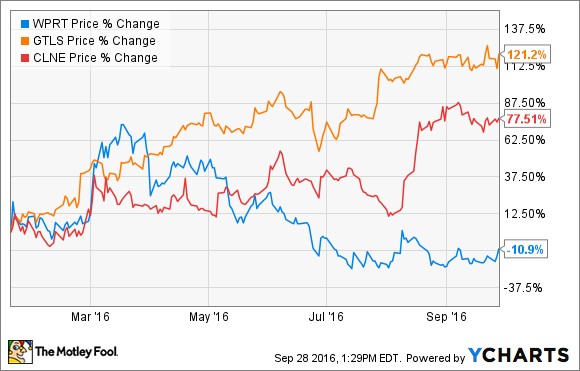 But the key difference is in the business results. Chart and Clean Energy have largely stabilized their cash flows, and are positioned to continue to ride out the downturn and profit from a recovery in demand for new natural gas vehicles and infrastructure, while Westport continues to consume cash at a rapid pace, which creates significant risk.

So while there's certainly upside for Westport, there's a lot more downside risk today. Clean Energy Fuels and Chart Industries also have strong growth prospects in coming years, but at a lower level of risk than Westport.