While I've been an active critic of Wells Fargo (WFC -2.19%) over the past few weeks for obvious reasons, this shouldn't be interpreted by readers as a sign that they should necessarily avoid its stock. If anything, in fact, the opposite is true.

I say that because Wells Fargo's stock is currently trading for less than 1.3 times book value. That's down from a peak of nearly 1.8 times book value last year, and is well below the two-plus multiple that its shares are likely to attract once interest rates move up in earnest and the bank's current troubles are relegated to the dustbin of history. 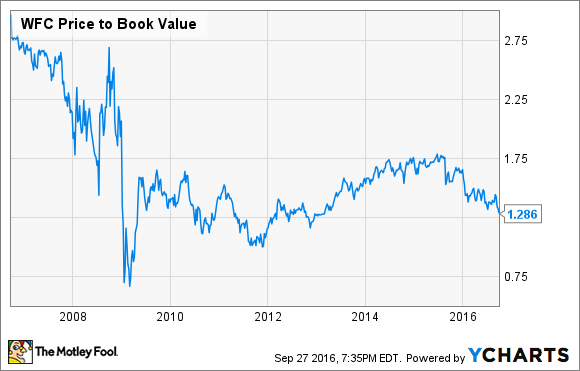 This doesn't mean that you should buy its stock right this very second. The bank's chairman and CEO testified on Capitol Hill again this week, answering questions from members of the House of Representatives on Thursday about a multiyear scandal that took place at the bank from 2011 to 2015.

Furthermore, lawsuits over the scandal are just now starting to roll in. Shareholders, customers, and employees are all moseying up to the litigation trough, hungry for restitution from the California-based bank. These cases will contribute to headline risk for Wells Fargo and will continue to erode its once-stellar reputation for prudent and profitable banking.

Even worse news could come from regulators. The Securities and Exchange Commission could file a suit against Wells Fargo if the agency concludes that the bank hid material information from shareholders by failing to report the scandal until this month. And senators as well as at least one regulator, Richard Cordray of the Consumer Financial Protection Bureau, have even intimated that federal prosecutors could file criminal or civil charges against the bank for defrauding customers.

The point is that Wells Fargo's shares could fall further from here, getting even cheaper as time goes on. Importantly, however, while headline and reputational risk shouldn't be ignored, they tend to exert their influence on a bank's short-term stock price, not its fundamental operations and thus long-term performance.

To me, this means that investors should continue to focus on Wells Fargo's core competitive advantages, understanding that its current reputational issues are temporary. These advantages include stellar underwriting discipline, an incredibly efficient operation, and capital and liquidity costs that are lower than Wells Fargo's closest competitors, banks such as Bank of America and JPMorgan Chase.

This also means that enterprising investors should begin to think about averaging into a position in Wells Fargo's stock, buying bits and pieces over the next few weeks or months as its stock remains weighed down by negative coverage. Betting on Wells Fargo at any point this year won't be for the faint of heart. But it certainly seems like one of those times when it could pay to be greedy while others are fearful.

2 of Wells Fargo's Businesses Took a Major Turn for the Worst Last Quarter, But...
358%