Moet. Hennessy. Louis Vuitton. Certainly, some investors reading this hope to attain the status these brands embody. But do the high-end products these brands sell translate to meaningful returns for investors in parent company LVMH (OTC:LVMUY)? The company itself was created via merger in 1987, though Louis Vuitton and Moet-Hennessy are much older than that, and over their history trading in the U.S., LVMH stock's American depositary receipts have indeed outperformed the S&P 500 since 2003.

Of course, these metrics only scratch the surface in parsing whether LVMH stock represents a quality investment today. To better understand the company and its prospective financial merit, let's more deeply examine the company's underlying business and stock valuation.

A portfolio of beautiful businesses

In terms of business strategy, you could distill Louis Vuitton Moet Hennessy's strategy to this: own and sell a portfolio of the world's leading luxury brands that consumers will consistently wish to buy. It's as simple as that.

In terms of brand power, the company controls some of the world's most recognized luxury consumer companies. Case in point, global brand consultancy Interbrand ranked LVMH's Louis Vuitton and Moet & Chandon brands as the 20th and 99th most valuable brands in the world in its 2015 ranking of global brands. Moreover, Interbrand estimated that these two brands were worth a combined $26.3 billion, and this doesn't even speak to LVMH's broader hoard of companies, which includes globally recognized brands such as Dom Perignon, Marc Jacobs, Fendi, Tag Heuer, Hublot, Parfums Christian Dior, and many more.

The world-renowned nature of LVMH's suite of luxury brands strongly suggests that its portfolio of companies should enjoy consistent demand into the long term, although such high-end goods experience some sensitivity to the business cycle. Here's how LVMH's profitability has behaved since 2005. 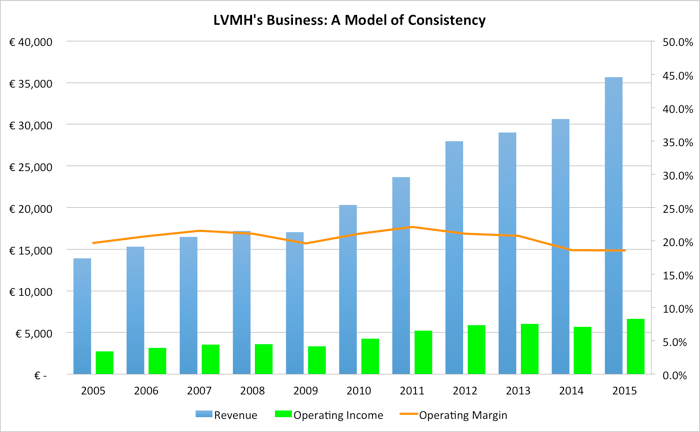 That's an astounding level of consistency considering the company-specific and macroeconomic volatility that took place during the above time frame. As LVMH's sales have more than doubled and the global economy entered and exited the worst economic crisis since the Great Depression, LVMH's operating margin didn't deviate more than 1.1% from its average margin during this period. Of course, there's no such thing as a sure thing in investing, but LVMH's ability to consistently produce profits for its shareholders certainly appears compelling.  .

The luxurious mystique of LVMH's brands also provides the company with favorable pricing power, as evidenced by the company's consistently strong operating margins. Louis Vuitton Moet Hennessy's profits from recurring operations were 17.2% in the first half of 2016, essentially in line with its full-year and first-half figures from FY 2015. What's more, increasing its global footprint, especially in Asia, has helped fuel impressive sales growth for the company. Over the past five years, LVMH has averaged top-line growth of roughly 11% annually. All told, LVMH has the kind of durable, profitable business model that can indeed fuel consistent outperformance under the right conditions. But what about its stock?

LVMH stock doesn't necessarily look like an obvious bargain at first glance. As of this writing, LVMH's stock trades at 20.6 times its last-12-months earnings and 18.4 times its estimated next-12-months earnings. However, this sits appreciably lower than the roughly 25 multiple of the S&P 500. Furthermore, thanks to the high-quality nature of its business model, there's a legitimate argument to be made that LVMH's consistent profitability entitles it to trade above bargain-barrel valuations. All told, LVMH passes the valuation test.

Equally compelling, LVMH has shown an impressive commitment to returning capital to shareholders, with its dividend yielding 2.9% at current prices. The evidence in favor of dividend growth investing speaks for itself, and LVMH's impressive track record of dividend growth certainly deserves note. In each of the past five years, LVMH has increased its annual dividend per share, averaging annual dividend growth of over 10% during that period. What's more, it has done so while also maintaining a seemingly sustainable payout ratio, which currently stands at 48%. All things considered, like the products it so successfully sells, shares of LVMH indeed look like a high-quality investment as they stand today.