Matthew DiLallo, Timothy Green, and Todd Campbell
(TMFmd19)
Author Bio
Matthew is a senior energy and materials specialist with The Motley Fool. He graduated from Liberty University with a degree in Biblical Studies and a Masters of Business Administration. You can follow him on Twitter for the latest news and analysis of the energy and materials industries: Follow @matthewdilallo

Companies that pay well above average dividend yields tend to have problems such as slowing growth or weaker balance sheets. However, that high yield is the reward investors can earn by taking on a bit more risk. That said, sometimes the risks are not as bad as the market thinks, which makes the reward well worth it. Here are three stocks that we think fit that profile.

A 9% yield that's growing safer by the day

Matt DiLallo: Anytime a dividend yield creeps up toward 10% it is usually a sign that the market believes the payout is no longer sustainable. That's certainly a concern at midstream master limited partnership Williams Partners (NYSE: WPZ), with its yield spiking this year due to sustainability concerns: 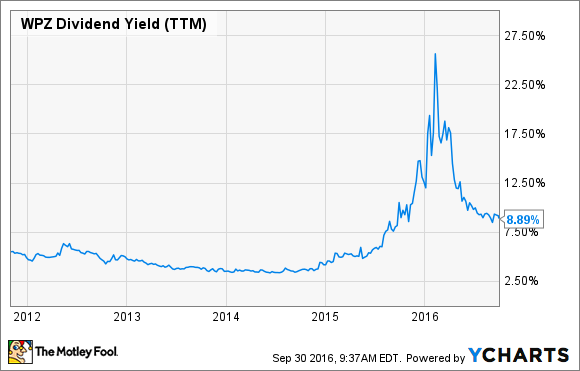 As that chart shows, the concerns have died down considerably from earlier in the year due in part to several smart moves made by parent company Williams Companies (NYSE:WMB). First, Williams Companies reduced its dividend to reinvest that cash back into Williams Partners to support its growth plan. Second, both companies are selling assets that have direct exposure to commodity prices, which should not only reduce Williams Partners' cash flow volatility going forward but provide the partnership with cash to fund its growth-project backlog. Finally, Williams Partners continues to move forward on several fee-based projects that are expected to drive significant cash flow growth through 2018.

Because of all these maneuvers, Williams Companies believes that its MLP can maintain its lucrative distribution through the end of next year and then restart growth in 2018. The growing visibility that the distribution is on solid ground is what makes Williams Partners such a compelling high-yield stock to consider buying right now.

Tim Green: Apparel retailer Gap Inc. (NYSE:GPS) has issues. Comparable-store sales are slumping, with the company's namesake stores and Banana Republic stores suffering from a prolonged period of poor performance. Earnings are in decline, with the company expecting to produce adjusted EPS of $1.87 to $1.92 this year. That's the worst performance since 2011.

The stock has unsurprisingly tumbled due to Gap's lackluster results. The stock has declined by more than 50% since hitting its peak in late 2014, and it's lost nearly 27% of its value so far this year. 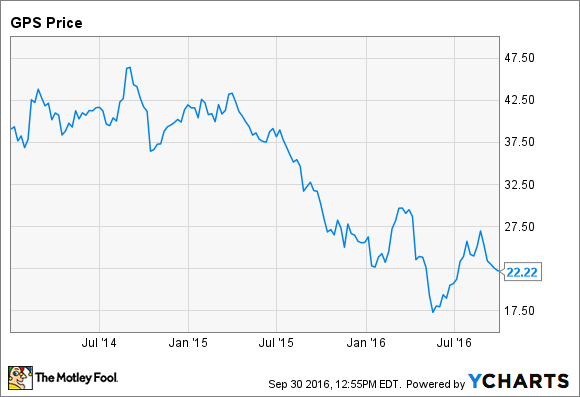 This falling share price has pushed up the dividend yield. At the moment, shares of Gap yield 4.25%. The company is still profitable, and adjusted earnings this year will easily cover the dividend. Gap needs to figure out how to turn things around, but the dividend doesn't look like it's in danger in the near term.

The main risk with Gap is the chance that the company never fully recovers. The apparel business is extremely competitive, and there's no guarantee that Gap will be able to right the ship. But for those who think the company will eventually find its way, an enticing dividend offers investors a good reason to buy and hold the stock through this difficult period.

A corner could turn for this high-yielding tech stock

Todd Campbell: Seagate Technology's (NASDAQ:STX) sales and profit have nose-dived in the past year and that's raised concerns that the company's handsome 7% dividend yield is unsustainable. Slowing sales and profitability undeniably pose a risk, but I think that tailwinds could emerge that reduce the likelihood of a dividend cut. If I'm right, this stock could reward investors with both stock price upside and a top-tier yield.

After all, the company generated $269 million in operating cash flow last quarter, and that more than covered its cash dividend payments of $188 million. Therefore, it wouldn't take much of an improvement in the company's business to put its dividend on firmer footing and reignite investor optimism, especially since any improvement in sales mix can be leveraged against recent cost-cutting for faster earnings growth.

Overall, Seagate Technology isn't out of the woods, but I don't think its business is as bad off as some investors think. For that reason, I think risk-tolerant income investors may benefit from buying some of this company's shares.