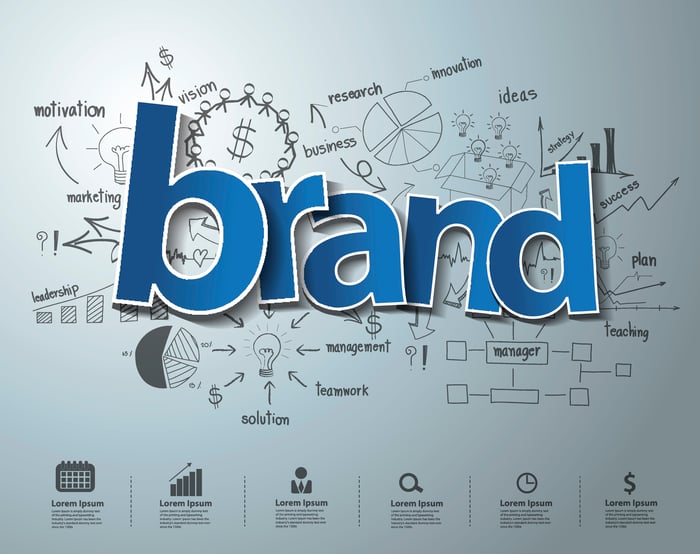 The value of a brand is that just the name conveys strength, but sometimes things go awry that not even a top brand name can fix. Image source: Getty Images.

What do a sneaker company, a maker of ATVs, and an organic grocer all have in common? They're all leading, well-known brands whose stocks are trading off their 52-week highs by double-digit percentages.

If a stock falls hard, particularly one with a durable name in its industry, it could be an opportunity to pick up shares on the cheap. But sometimes a stock trades at a discount for a very good reason, so let's take a look at Skechers (NYSE:SKX), Polaris Industries (NYSE:PII), and Whole Foods Market (NASDAQ:WFM) to see if they are good values at these lower prices -- or just value traps. 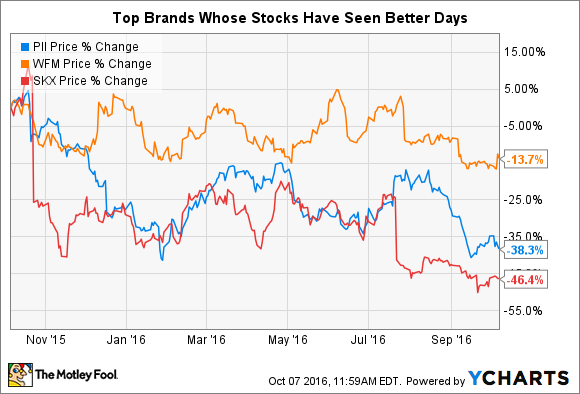 Shares of the second largest footwear company in the U.S. behind Nike (NYSE:NKE) have lost 53% of their value from this year's highs as a sudden deceleration in growth has turned negative. A year ago, Skechers saw sales in its domestic wholesale business begin to slow, and that has continued every quarter since, culminating in such sales turning negative in the second quarter.

Although international sales had been rocketing higher at the same time the company was seeing domestic sales growth rates fall, thus offsetting some of the effects, last quarter, those growth rates also tumbled by more than half, suggesting Skechers' global expansion was taking a hit, too. All of this is not coming at a good time for the footwear company. It's still fighting Adidas for the second-place spot even though both companies remain well behind Nike, which has a massive 62% market share. Meanwhile, Under Armour (NYSE:UAA) continues to increase its penetration into the footwear industry. In fact, with UA's 58% increase in footwear sales in the second quarter, it's clear where a lot of Skechers' business went.

With Skechers' third-quarter earnings due out soon, investors probably shouldn't expect much difference in the results.

When Polaris introduced the RZR side-by-side in 2007, it immediately set the ATV industry on its ear and launched the powersports vehicle maker to the forefront, a position it hasn't relinquished since. The RZR was the first ATV to meet the 50-inch maximum vehicle width regulations to ride on trails on federal lands, but now there's plenty of competition in the market, and Arctic Cat (NASDAQ:ACAT) has seen success with its Wildcat side-by-side.

This is why Polaris's own troubles, which have knocked its stock down 40%, come at an inopportune time. For over a year now, Polaris has suffered from a recurring series of product recalls due to a fire hazard that resulted in at least one death. Tens of thousands of its RZRs have been recalled, and while management initially said it had the problem under control, it turns out it didn't, and even more RZRs needed to be recalled.

Fortunately (if that's how you want to look at it), the off-road vehicle market is in the midst of a severe slowdown, so there are fewer people looking to buy a vehicle at the moment, and hopefully Polaris Industries will get its "thermal hazard" fixed by the time people want to buy them again. In the meantime, though, investors might just want to garage the powersports vehicle maker's stock.

The oft-maligned organic grocer has actually been the best performer of these three stocks, with shares down just 18% from its 52-week high. Yet it too suffers from competitive problems as rivals like Wal-Mart (NYSE:WMT), Kroger (NYSE:KR), and just about every corner bodega have expanded their organic fresh produce selections.

Worse, the problems that dogged the supermarket throughout its existence, namely the high cost of organics, persist such that Whole Foods was forced to launch a discount chain, 365 by Whole Foods, to help counteract its image as "Whole Paycheck." Those new stores will allow it to more effectively compete against the discounters in the space, such as Trader Joe's.

That's actually good news because it shows the company is finally learning to adapt to the forces that were arrayed against it for so long. And by pushing its higher-margin 365 house brand more, Whole Foods is also bolstering its bottom line. Its investment in grocery delivery service Instacart additionally indicates it understands there are more ways to reach potential grocery shoppers.

Valued at just a fraction of its sales, Whole Foods Market is the one beaten-down big brand that could surprise the markets.