The aluminum producer and aluminum parts manufacturer's profits and revenue missed expectations, but there's a lot more investors need to know about the company going forward.

Commercial transportation has been mixed for Alcoa in 2016. Image source: Alcoa.

Shares of aluminum giant Alcoa Inc (AA) are down 11.1% at 3:15 p.m. EDT on October 11, following release of the company's third-quarter financial and operating results before market open. This is the single worst trading day for Alcoa's stock in several years, and it has shifted Alcoa from a money-making stock in 2016 to a 5% loser since the start of the year: 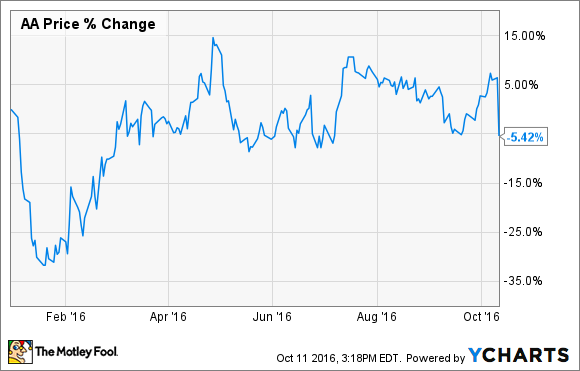 Today's big sell-off is largely a product of Alcoa missing expectations, as well as concerns about continued weakness in key industries. Alcoa reported $5.2 billion in net revenue -- a 6% decline from the year-ago quarter, and well below the $5.3 billion consensus analyst estimate -- and earnings per share of $0.33 per share, short of the $0.36 per share analyst consensus.

Alcoa, which is set to split itself into two separate companies on November 1, is feeling the effects of mixed demand across several important industries it serves, while also dealing with generally low bauxite, alumina, and aluminum prices that are affecting revenue and profits both.

Revenue in its mining and alumina/aluminum production business (which will be spun off on November 1 as a separate company, though it will retain the Alcoa name) was flat sequentially and saw its after-tax operating income fall 15% as alumina prices remain soft.

The engineered products segment (the business that will be renamed Arconic) reported a 1% decline in revenue as the aerospace industry goes through adjustments in product deliveries and softening demand from the North American commercial transportation industry offset growth from the automotive industry. After-tax operating income at Arconic increased 4% even with weaker sales.

Alcoa also revised its guidance related to the future Arconic business for the remainder of the year, largely related to short-term shifts in the aerospace industry. The company reduced sales expectations in its Global Rolled Products, Engineered Products, and Transportation and Constructions Solutions segments by as much as $800 million combined for the full year.

There are three key takeaways:

Looking at the bigger picture, Arconic is likely to benefit from big demand from industries that are showing cyclical weakness right now, particularly an aerospace industry in transition. Long-term demand from aerospace is expected to be very strong, along with increasing use in the automotive industry and a steadily strengthening construction industry.

For the upstream business, which will be spun out in November and retain the Alcoa name, the company has become a low-cost leader, with production costs cheaper than more than 80% of alumina producers and more than 60% of aluminum producers. If materials prices -- which are still near the lowest levels since the Great Recession -- continue to improve, this could bode well for Alcoa. Considering that demand growth is expected to far exceed production growth for the remainder of 2016, higher prices could very well happen.

Bottom line: Both parts of Alcoa continue to face pressures in the near term, but the long-term prospects shouldn't be ignored. Today's big sell-off could turn out to be a great opportunity to buy, but until Alcoa and Arconic are trading as separate companies, it may be best to stay on the sidelines.