Uranium supplier Cameco Corporation (NYSE:CCJ) is preparing for the demand that's expected to come from a growing global fleet of nuclear power plants. But today uranium prices are low, taking a bite out of the miner's top and bottom lines. The company has increasingly relied on debt to build for the future, something you'll want to keep an eye on. Here's what you need to know.

In 2010, Cameco's long-term debt stood at around 15% of its capital structure. Mining is a capital-intensive business, subject to often wide commodity price swings, so that's a really solid figure. At the end of the second quarter of 2016, long-term debt made up around 20% of the company's capital structure -- still not a bad number, on the whole.

However, the debt trend is obviously going the wrong way since more debt isn't really better here. And the debt figure is about twice as large as what it was in January of 2010. Meanwhile, shareholder equity, the other half of a company's capital structure, increased by only about 20%. In other words, Cameco's been using a lot of credit lately. 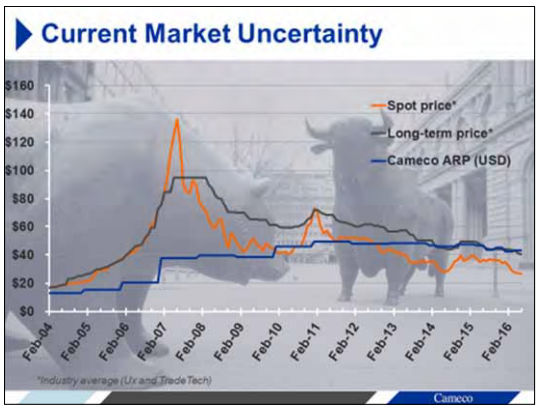 But there's a good explanation for this. First off, commodities, including uranium, have been in a downturn since around 2011. As you can see from the chart above, there was a huge uranium price spike late in the last decade, followed by another around 2011. But, on the whole, uranium prices have been heading downhill for some time. That, meanwhile, has led to a less-than-desirable earnings trend. The bottom line has basically been heading lower all decade and is in the red through the first six months of this year.

Which has been an increasing problem for the company. For example, in 2015 the company's cash balance fell by 20%. It fell another 70% through the first six months of this year. In other words, Cameco is burning cash. A company can only do that for so long before something has to give.

But Cameco isn't looking out six months or even a year. It's looking decades into the future. And, based on its projections, demand is set to head higher. For example, there are 60 reactors under construction right now, most of which should come on line in the next few years. That, in turn, is expected to create the need for the uranium mining industry to build new mines to meet future demand. 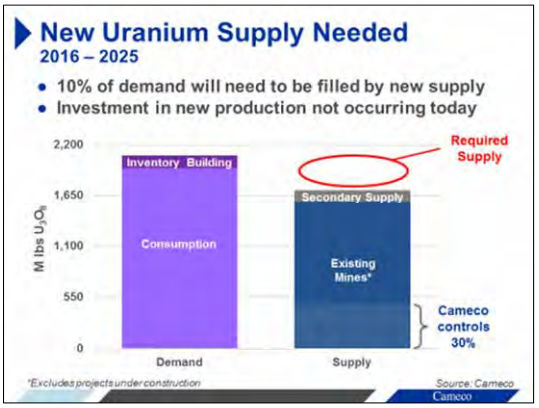 Mines, however, take a long time to build. So a miner has to start getting ready for demand before it shows up or it'll be behind the curve. Thus, Cameco has been trying to balance investing in higher-quality mines, which costs money, with an increasingly difficult pricing environment and lower earnings.

The company's Cigar Lake mine has been the big investment, with production expected to reach targeted levels next year. This was no slam dunk investment, however. It was originally expected to cost $450 million when the company approved the mine in 2004, but by the time it first started producing uranium in late 2014 that cost had ballooned to over $2.6 billion.

So it's pretty simple, really. How does a company keep investing for what it expects to be a bright future while its business is struggling? It adds debt to the balance sheet. To be fair, that's the normal model for a mining concern because of the big up-front costs of building new mines. Once the mine is up and running, the miner, Cameco in this case, usually pays down the debt. Only following the normal path is harder today because of the commodity downturn.

All through this difficult period Cameco has continued to pay a dividend, too. That's been a nice bonus for shareholders, but with earnings sinking into the red so far this year (and generally trending lower for years) that's looking like a costly luxury increasingly being backed by debt. However, it also provides a fail-safe for Cameco, since it could free up enough money to pay its financing costs by eliminating the dividend.

That would not exactly be great news, since a dividend cut is rarely a good thing, but it makes the growth in the debt load look a lot less onerous. And if the uranium market starts to look better, Cameco's efforts to prepare for the future will, indeed, end up paying off. Still, if you are a shareholder, you need to keep a wary eye on the company's balance sheet. It's fine for now, but the trends are going the wrong way and debt could, eventually, be a trouble spot -- particularly if the uranium future doesn't play out as Cameco expects.