Shares of TASER International, Inc. (NASDAQ:AXON) have fallen nearly 20% in the past couple weeks as investors have quickly turned from bullish to bearish on the company. And most of the turnaround in sentiment happened on a single day, when the Supreme Court decided not to hear a case involving Tasers, and the NYPD chose a competitor's body cameras.

The question facing investors is: Is the drop in the stock a buying opportunity? 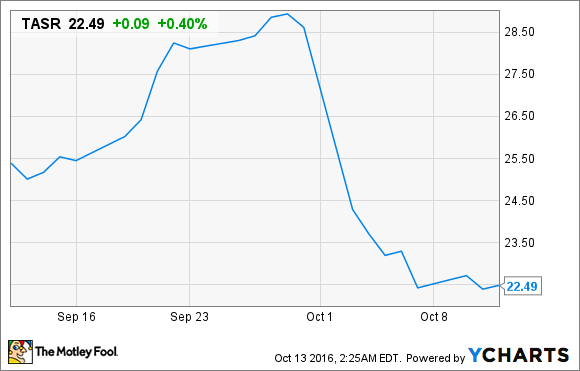 Could Tasers be under fire?

Body cameras are growing in importance for TASER International, but Tasers are still the company's bread and butter. In the second quarter, weapons accounted for $45.5 million in revenue compared to $13.2 million from the body camera segment.

What may be worrying investors right now is the Supreme Court not hearing a case where a Taser was deemed to be excessive force. Clearly, guns from Smith & Wesson (NASDAQ:SWBI) and Sturm, Ruger (NYSE:RGR) have already been deemed excessive force at times, but this could begin to associate Tasers with the same level of danger as guns. TASER International has been able to sell Tasers as safer than guns, so this could undermine the case for law enforcement officials carrying Tasers.

While the Supreme Court not hearing the case was an incremental negative for Taser sales, federal court's opinions on Tasers as "excessive force" is murky with some appeals courts allowing officers more leeway in how tasers are used. Tasers are clearly a less lethal option than a gun, so TASER International can still sell customers on that angle, but there may be more scrutiny on how tasers are used in the field if they're considered excessive force. Until we see a big drop in Taser sales, I think this is merely speculation that sales of Tasers will drop and doesn't quite match up with reality.

Is the body camera business under fire?

There's been sporadic fear that competitors will start coming after TASER International's lucrative body camera business. Last year, shares dropped 15% on the mere mention that Motorola Solutions (NYSE:MSI) was introducing a competitive product, and this week shares fell after Vievu won a contract to supply more than 1,000 body cameras to the NYPD.

It would be unreasonable to think that TASER International will win every body camera contract and competition certainly sees the opportunity in the industry. But keep in mind that Axon's future contracted revenue is $262.8 million, mainly from Evidence.com subscriptions, and services gross margin is currently 71%. Body cameras are a highly profitable business for TASER International, and the company is winning a vast majority of the business available, even if it doesn't win every contract.

A stock with a lot of potential

I think the drop in TASER International's shares is way overdone and investors are underestimating the market lead the company has in a highly profitable business. As more law enforcement agencies around the world begin using body cameras, the platform TASER International is building will become more and more valuable. And with hundreds of millions of dollars in future revenue already booked, the company is building a stable profit machine.

Losing a few contracts for body cameras or officers adjusting how they use Tasers aren't the end of the world for TASER International. The long-term investment thesis for the company is still strong.