Please ensure Javascript is enabled for purposes of website accessibility
Log In Help Join The Motley Fool
Free Article Join Over 1 Million Premium Members And Get More In-Depth Stock Guidance and Research
By John Rosevear - Updated Oct 17, 2016 at 8:07AM

Ford made big investments in Russia, hoping for future growth that hasn't materialized. GM pulled out of Russia last year, but Ford CEO Mark Fields is staying the course. Here's why.

Ford Motor Company (F -5.02%) CEO Mark Fields has recently put more emphasis on what he calls Ford's "pillars of profitability." These are business lines, like pickup trucks and SUVs, where Ford has a strong market position and generates big profits.

It's a useful way to think about the foundation of Ford's current business. At the same time, Fields is putting more emphasis on areas that could be future "pillars of profitability," but that need some work to get there.

One of those is Ford's effort in emerging markets, which Fields now refers to as a "strategic priority" for the Blue Oval. Specifically, despite big losses over the last couple of years, Fields thinks that Ford's operations in Russia still have a lot of potential. Here's why.

"One of our strategic priorities is building a leadership position in select emerging markets," Fields said at Ford's Investor Day presentation last month. "Select is a really important word here, because it's about where we can win." 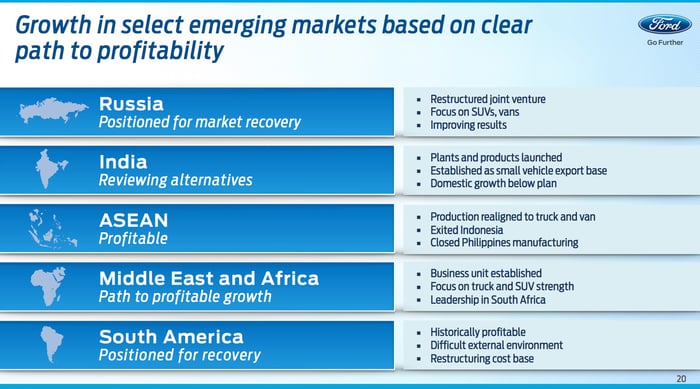 In his presentation, Fields talked up the immense potential of Russia in particular. Ford made substantial investments in Russia several years ago, but those investments have yet to pay off in the way the Blue Oval had originally envisioned.

Russia: Tough times now, but big potential in the future

"Today, when you look at [Ford's efforts in] emerging markets, it includes Russia, where we see good potential in a higher fuel environment. Russia has the potential to be one of the top 3 markets in Europe. We all know, tough times economically, that it's been going through, but we made the decision to stay, and I think that was absolutely the right decision."

Ford made a big bet on Russia back in 2011. At the time, high oil prices were fueling good economic growth in the country, and auto sales were growing sharply even as other big emerging markets like China were showing signs of cooling. It looked like a good bet.

That bet looked a lot less encouraging a few years later. New-car sales in Russia slumped after oil prices dropped sharply, leading rival General Motors (GM -3.65%) to pull its operations out of the country. But despite big losses in Russia in 2014, Ford said last year that it would essentially double-down, building out its presence with a view to the long term potential of the huge Russian market.

A Ford Explorer rolls off the assembly line at the Ford-Sollers plant in Vsevolozhsk. Image source: Ford Motor Company.

The market is still a tough one, but Fields is already seeing signs of improvement.

Fields made it clear that Ford won't hesitate to pull out of markets if it doesn't see a path to profits over the long haul. "What's clear to us on emerging markets, just like I mentioned on our vehicle lines, we have to convince ourselves that there is a path to sustained profitability. And if there isn't, we make decisions," Fields said. [emphasis added]

Russia has been a tough one for Ford, with substantial losses over the last couple of years. But as Fields noted, we've seen some signs in 2016 that things are looking up for Ford's operations there, despite ongoing tough conditions. Russia is a huge country that clearly has long-term potential: I think shareholders should continue to give Fields and his team the benefit of the doubt in Russia for a while longer.