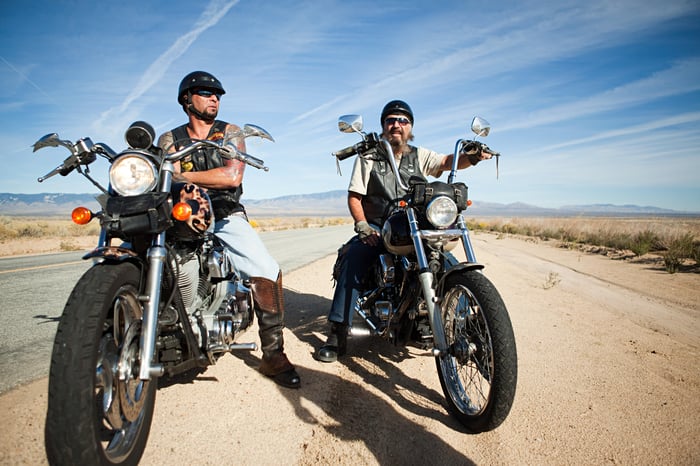 Shares of motorcycle giant Harley-Davidson Inc (NYSE:HOG) jumped as much as 10% on Tuesday after announcing third-quarter earnings and a cost-reduction plan. At 3:20 p.m. EDT, shares had settled in at a 9.2% gain on the day.

Third-quarter revenue fell 4.3% to $1.09 billion, and net income fell 18.7% to $114.1 million, or $0.64 per share. Weak demand in the U.S., where sales were down 7.1% in the quarter, was blamed for the decline in results. Competition is taking some of Harley-Davidson's market share and consumers just aren't spending as much money on motorcycles in general, so it's really no surprise that revenue is down.

What investors were really excited about were cost reductions that could boost margins in the future. Management said the company would incur about $20 million to $25 million in reorganization costs to reduce headcount, which is expected to lead to $30 million to $35 million in annual savings.

The growth days of the motorcycle industry appear to be in the past as the pent-up demand after the recession moves further away in the rearview mirror. That's what Harley-Davidson is adjusting to -- realigning its cost structure with the sales it can expect in the future.

Adjusting the business can be a difficult process, but it can also boost margins and allow Harley-Davidson to increase returns to shareholders despite sluggish sales. And as long as products remain competitive and market share doesn't fall too much, the stock is a good value at 14 times trailing earnings.