Two of the biggest companies in the gaming industry today are Wynn Resorts Ltd. (NASDAQ:WYNN) and Caesars Entertainment (NASDAQ:CZR). But they couldn't be more different for those looking to invest in the space.

Wynn is a high-end operator, with a founder -- Steve Wynn -- who keeps the company from getting over-leveraged and maintains a focus on attracting the wealthiest gamblers in the world. Caesars Entertainment is focused primarily on the lower end of the gaming market, and is controlled by two private equity firms that loaded it with over $20 billion in debt. This makes them very different stocks to invest in.

The bottom line says a lot about gaming

Wynn and Caesars are both big players in Las Vegas, but it's Asia where they're very different. Wynn operates Wynn Macau and recently opened Wynn Palace, which combined will likely generate well over $1 billion in EBITDA, or cash flow, next year. 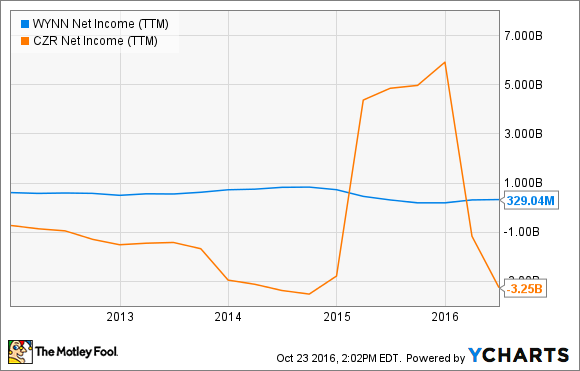 Caesars is struggling because it had too much debt and was in weak gaming markets like the U.S. regional market. Conversely, Wynn gets most of its revenue and earnings from Macau.

Wynn is operating in more attractive markets, but Caesars' future is also uncertain because of Caesars Entertainment Operating Company's bankruptcy. A recent agreement reduces the stake of shareholders not associated with Apollo Global Management and TPG Capital from one-third of the company to about 6% of the company. Investors won't be wiped out, as they could have been in bankruptcy, but they'll own very little of a healthier Caesars Entertainment.

The restructuring has also not been agreed to by all groups, so further dilution and/or bankruptcy is still possible. Investors are taking a big risk just owning shares of Caesars Entertainment at this point.

As it stands today, Wynn Resorts owns better assets than Caesars Entertainment and is also a more stable company. Caesars' subsidiary's bankruptcy brings a lot of uncertainty to investors, and I don't think it's a bet worth taking given the alternative.

To top it off, Wynn Resorts pays a 2.1% dividend yield, an attractive payoff given the cash flow coming from the gaming giant.