Some people buy and sell stocks on a daily basis, or even rely on computers to make moves in a microsecond. That's called day trading -- or stock-based gambling, honestly. Investors in the Foolish school of thought prefer to buy great stocks at reasonable prices, and then hold on for the very long term. In the words of master investor Warren Buffett, the ideal holding period is "forever."

That's how I think about investing, and you'll never find me buying a stock that I'm not comfortable owning for the next several years. And some of my holdings are very, very likely to stay in my portfolio forever. These businesses are built to last for decades and beyond. Three of my favorite companies in that category are Walt Disney (NYSE:DIS), American Tower (NYSE:AMT), and Alphabet (NASDAQ:GOOG) (NASDAQ:GOOGL). Let me explain why I see these three stocks delivering strong returns, essentially forever.

Wireless connections are everywhere nowadays. The smartphone and tablet boom of the last decade may be fading out, but only to be replaced by data-hungry modern cars, the rise of the Internet of Things, and more bandwidth-thirsty digital video services.

It's all the same to American Tower. No matter what wireless services might be in demand today or tomorrow, the company can provide an industry-leading network of radio towers to make it happen. Besides mobile voice and data streams, the company also supports traditional radio and TV broadcast platforms and other wireless technologies. But the real growth driver is the ever-advancing march of mobile network technologies.

This stock is a simple tool for tapping into the global growth of data services without picking sides in the heated customer-facing rivalries. American Tower will stay relevant as long as people keep asking for more and better networking services. That's a pretty close synonym for "forever" in my book.

All of these arguments obviously apply to the tower management industry as a whole, but American Tower stands head and shoulders above the competition in almost every way. Here's how the company has performed over the last ten years: 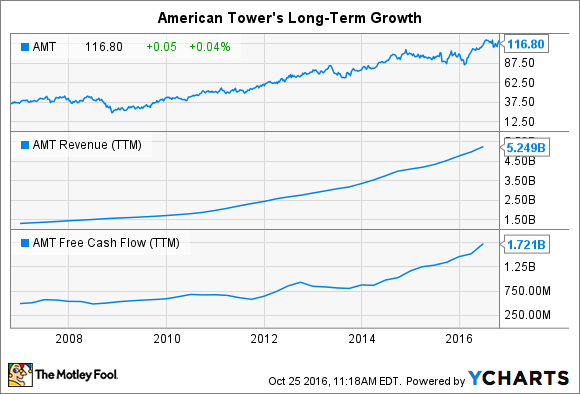 I really don't have to explain what Disney is all about. Built on a foundation of top-quality storytelling, the entertainment giant runs a global empire of content production, theme parks, broadcast networks, and cruise ships.

Under the careful stewardship of CEO Bob Iger, Disney built a world-class content library alongside a talent army without equal. The company has adopted the creative geniuses of Pixar, Lucasfilm, and Marvel. Everything else starts from there, funneled through an industry-leading management team. The end result is a cash machine of epic proportions -- with epic staying power to boot.

Let me put it this way. In corporate finance legend Aswath Damodaran's risk management tome "Strategic Risk Taking," the NYU professor used Disney as an example of stocks that just keep on trucking no matter what the economy might be doing. Through economic boom or bust, recessions and depressions, Disney's shares almost always perform on their own merits. And since those merits are of the top-shelf variety, Disney crushes the market over the long haul.

Disney is the kind of stock you'd give to your kids as an early introduction to investing. They'll still appreciate that gift many decades later. And so will my retirement portfolio. 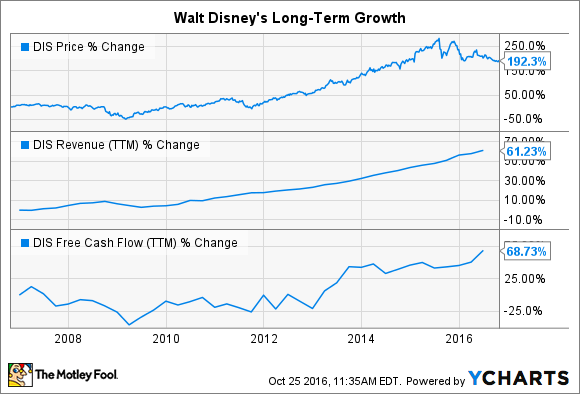 Formerly known as Google, the Alphabet you see today is still a tightly focused titan of online services. It's the leading supplier of search and advertising tools on both the domestic level and the global scene. The Google-branded segment generates 99.6% of Alphabet's revenue and all of its operating income.

That's a fine market position to start from. For the long haul, however, you should expect Google to fade into the background of a much larger multi-industry conglomerate.

Alphabet is already making inroads into many offline markets. Self-driving cars, balloon-mounted long range networking, low-cost gigabit internet access, services, medical research, renewable energy... Alphabet has its fingers in all of these pies and many more.

Every successful company eventually runs into the innovator's dilemma. In the face of new innovation and revolutionary business ideas, most companies fall back into a defensive position. But there's no reasonable way to stop progress, so defending an outdated business model often becomes the last act before the curtains fall forever.

Alphabet is getting around this inevitable endgame by placing serious bets in what look like tomorrow's best growth industries. If and when the online empire turns obsolete, the Google-based seed money should be ready to sprout new fortunes across many fields of human innovation.

I don't think of Alphabet as today's leading online search and advertising business. That's merely the starting point for a much larger and more resilient bet on innovation and calculated risks. That's why Alphabet will survive the next several waves of market-disrupting innovation. Whatever the next big thing might be, this company will make sure to play a significant role in it.

And that's why Google-slash-Alphabet belongs in my portfolio, right now and practically forever. 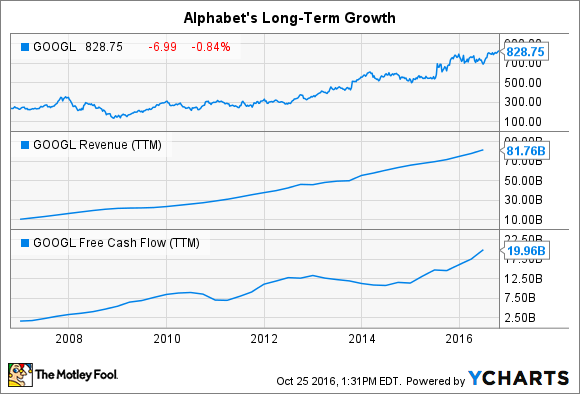 Of course, "forever" is an incredibly long time. The business world is always in the middle of a million drastic changes. What looks like a rock-solid business today could be undermined by new technology and better ideas tomorrow. Key business leaders may leave, retire, or change their minds about important policies.

The best long-term investments should be able to change with the times and stick around for a century or more. That's why I will give my "forever" stocks a very long leash, but still keep an eye on them to make sure that nothing is changing my investment thesis. Nothing is impossible. But from where we stand today, it looks like I'll be owning these three stocks for decades to come. That's pretty darn close to "forever," in practical terms.