Doing the right thing is almost always harder than doing the wrong thing. But this has never stopped Chipotle Mexican Grill (NYSE:CMG) from pursuing what it perceives to be the best way to grow shareholder value.

In this case, I'm talking about its decision over the past year to buy back more than $1 billion worth of its shares after its stock price plummeted following multiple foodborne illness outbreaks at its locations that began in the fourth quarter of 2015. You can see the impact of this on Chipotle's outstanding share count in the chart below. 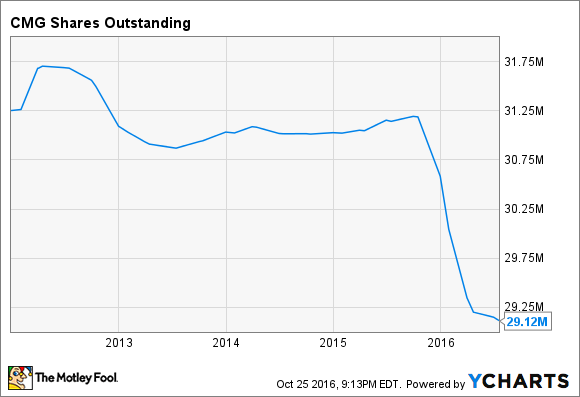 And Chipotle's appetite for its seemingly undervalued shares hasn't been satisfied yet. On Tuesday, the burrito chain announced that it has added an additional $100 million to its buyback authorization. Combined with an existing $69 million left from prior authorizations, Chipotle has nearly $170 million that it can use to continue consolidating ownership around loyal, long-term shareholders.

Relative to the chain's past history of buybacks, this is a healthy amount. Though it certainly pales in comparison to the amount spent by Chipotle in the fourth quarter of 2015 and the first quarter of 2016, as you can see below. If you've followed the news about Chipotle, you might think this is crazy. Same-store sales at its locations plummeted after an E. coli outbreak at locations in the Pacific Northwest last year. And the problem was compounded with norovirus outbreaks at locations in California and Massachusetts this year. To this end, in the most recent month, September, sales were still down by 20% compared to the year-ago period.

But the fact of the matter is that nearly every restaurant chain in America has gone through a similar experience, be it McDonald's, Taco Bell, KFC, or Jack in the Box, among others. Assuming Chipotle follows a similar trajectory, right now is exactly when investors would want its executives to aggressively buy back stock, given that its share price has dropped by nearly 50% since peaking last year.

Moreover, while Chipotle has a fraction of the liquid resources that it had at its disposal at this time last year, it still has plenty of cash and cash flow to continue funding repurchases. As you can see in the chart below, it has $610 million worth of cash and investments and generates roughly $100 million each quarter in operating cash flow.

There's no question that Chipotle's underlying performance needs to improve if it hopes to reclaim its spot at the apex of the American food industry. And fortunately, that's what we're seeing. As I discuss here, its sales are slowly but steadily improving and the chain's executives expect its comparable sales to reverse course and thereby climb in the high single digits next year.

This is a tough time for shareholders in the burrito chain, but five years from now you'll look back and thank Chipotle's executives for doing the right thing and buying back stock at a fraction of its former share price.