Staffing company Robert Half International's (NYSE:RHI) prospects are always going to be tied to the state of the economy, and if the company's third-quarter results and outlook are an accurate guide, then investors can expect more sluggish growth ahead. Let's take a closer look at the earnings report and see what happened in the quarter.

As you can see, earnings were smack in the middle of guidance, but revenue was almost at the bottom of the range provided on the second-quarter earnings call. If the results were underwhelming, then management's forecast for the fourth quarter was even more so: 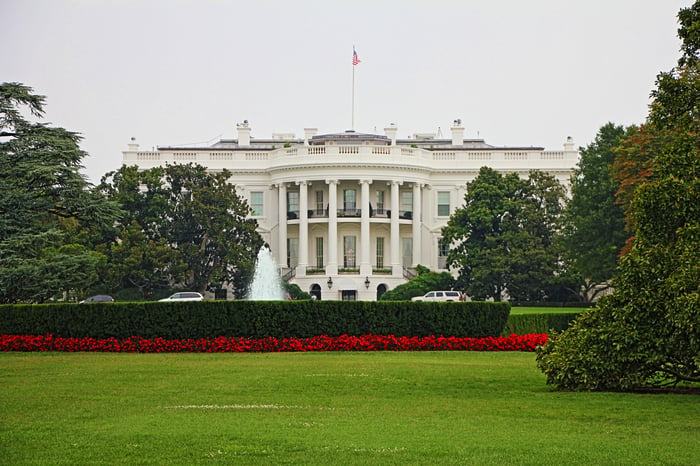 Essentially, the weak trends established in the previous quarter carried through into the three months that ended in October. Robert Half ended the second quarter growing at rates lower than the average -- an indication of a linear decline during the three-month period. It was a similar story in the third quarter.

Speaking on the earnings call, CFO Keith Waddell outlined how global temporary and consulting staffing revenue "decelerated during the third quarter," with September "roughly flat," compared to a 2% increase for the quarter. Moreover, trading in the first two weeks saw revenue decline 1.5%.

Turning to permanent placement, Waddell noted that September was down 4% compared to a 5% decline in the quarter, although on a more positive note, revenue increased 1% in the first three weeks of October.

Below, I've broken out the quarterly figures by U.S. and international (temporary and consulting and permanent placements) so that readers can get a good handle on trends.

As you can see below, the weakening in permanent employment hiring in recent quarters is a pretty clear sign that GDP growth is slowing. 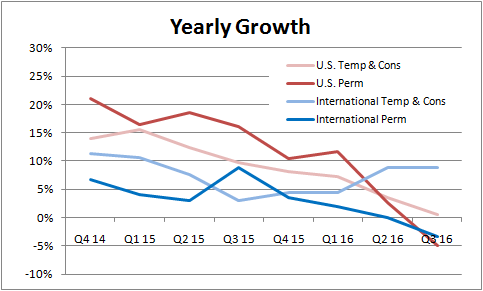 On the earnings call, Waddell characterized the environment as one in which clients "remain cautious with little sense of urgency ... in part due to macro uncertainty, in part due to election uncertainty." In such a scenario, clients are therefore being more selective and focusing on "only looking for the top tranche" of candidates.

Waddell summarized it as being a "continuation of what we've talked about for two or three quarters," accompanied by a lengthening in the sales cycle. In other words, it's a difficult trading environment.

On a more positive note, Waddell discussed the successful implementation of a front office Customer Relationship Management (CRM) system in the U.S. and a new project management system for its global consulting business Protiviti, with costs running at the low end of expectations. While the benefits are seen as occurring in the long term, the trouble-free implementation helps to reduce some stock-specific risk.

Robert Half International's guidance is hardly inspiring, but on the other hand, its revenue growth (particularly in permanent placements) is always subject to economic conditions and corporate sentiment. On that note, economists are forecasting better growth next year, and uncertainty over the election will dissipate soon enough.