Stocks had a mixed performance last week. As third-quarter earnings season hit full-speed, the Dow Jones Industrial Average (DJINDICES:^DJI) eked out a tiny gain while the broader S&P 500 (SNPINDEX:^GSPC) fell by 0.7%. Both indexes remain roughly 4% higher so far in 2016. 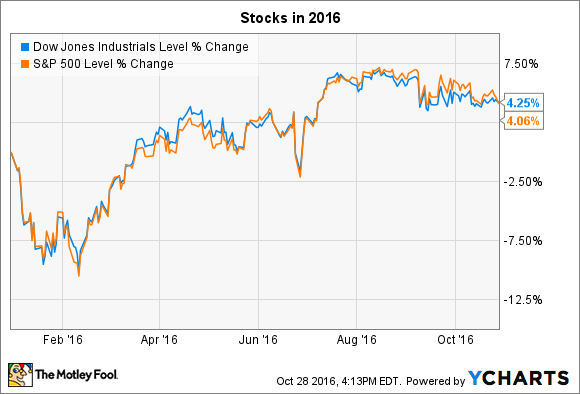 The big economic news of the coming week will likely be from the Federal Reserve as it completes its monetary policy meeting on Wednesday. The Fed isn't expected to boost rates at this event, but it may signal a hike in the cards for its December meeting.

Meanwhile, Facebook (NASDAQ:FB), Fitbit (NYSE:FIT), and Activision Blizzard (NASDAQ:ATVI) investors could see big moves in their holdings driven by earnings reports slated to publish over the next few trading days.

Expect volatility around Facebook's stock this week. The social media giant is up 25% so far in 2016, reflecting the high expectations investors have following last quarter's blowout results. Facebook last posted a 59% revenue surge and soaring profitability as users continued to flock to its platform and advertisers followed.

Look for growth to slow down from that pace this quarter, since the company is up against a tough prior-year comparison. As usual, user growth will be the key metric. Facebook attracted 17% more daily active users last quarter, and another double-digit increase would be critical to maintaining the 60% growth pace in advertising revenue.

Operating margin is likely to decline in the short term as Facebook ramps up spending on growth initiatives like messaging, virtual reality, and video, which CEO Mark Zuckerberg said in July is increasingly finding a home "at the heart of all our services."

Also on Wednesday investors will get an important business update from Fitbit, the leader in wearable technology. Consensus estimates call for sales to rise by a healthy 24% to $506 million, or at the high end of the forecast that management issued back in August. Profits should decline, though, because of extra spending on research and development and marketing support for its products.

Past results won't be nearly as important as what Fitbit has to say about the reception of its refreshed product lineup. New editions of its Charge and Flex devices attracted positive early reviews, but this week's numbers will show whether retailers are stocking up on the fitness products in expectations of strong demand over the holidays.

Fitbit needs to sell millions of these devices while also convincing customers to use them daily so that its ecosystem grows stronger. There's no question that competition has eaten away at its market share, which raises the stakes for Fitbit to deliver evidence this week of a compelling batch of product launches.

Video game developer Activision is near all-time highs headed into its quarterly report on Thursday. After all, there's no shortage of growth drivers for this highly diversified market leader, including new games like Overwatch and the latest chapter in the Call of Duty franchise set for release on Nov. 4. There's also new business models to exploit, including microtransaction-supported initiatives from King Digital. Finally, management couldn't be more bullish on Activision's potential in the e-sports genre given that gaming fans already spend millions of hours watching broadcast competitions tied to its brands.

Surging engagement has powered stellar results from the developer, including record cash flow last quarter that was up 250% over the prior year. There isn't much reason for concern about an elevated stock price, either. Yes, shares are up 15% this year. However, the company is still valued right in line with rival Electronic Arts at 22 times expected earnings.