The ultimate day of reckoning is coming for Wells Fargo (NYSE:WFC), and the impact on the value of its shares could be substantial. In two-and-a-half weeks, investors in the nation's third biggest bank by assets will learn if Warren Buffett has decided to stick with the bank in the wake of its massive fake-account and employee-retaliation scandal.

While the scandal was first reported by The Los Angeles Times in December of 2013, it wasn't until September of this year that the extent of it became widely known. That was the day the Consumer Financial Protection Bureau announced that it had fined Wells Fargo $100 million for opening millions of accounts for customers, without customers' consent. It was the largest penalty assessed by the CFPB in its five-year history.

Together with fines from the City and County of Los Angeles, as well as the Office of the Controller of the Currency, Wells Fargo paid $185 million to the various agencies. This is a drop in the bucket compared to the $5.5 billion or so that the bank earns on a quarterly basis, but the reputational damage inflicted on Wells Fargo has contributed to the loss of more than $20 billion worth of market value. 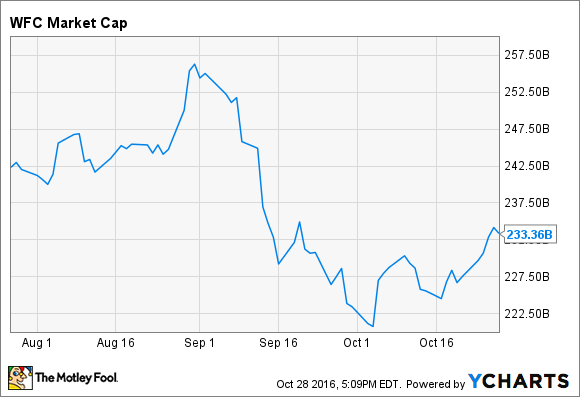 Buffett declined to comment on the situation in the immediate aftermath of the scandal, saying that he'd wait until November to do so. However, he subsequently went on the record to quash rumors that he had spoken to Wells Fargo's board of directors calling for a "radical transformation of the bank's ethics," as claimed by Douglass Kass of Seabreeze Partners Management.

Buffett, who oversees Berkshire Hathaway's (NYSE:BRK.A) (NYSE:BRK.B) 10% stake in the California-based bank, responded by saying that wasn't true. "It's dead wrong to imply I've spoken to the board directly. Going to the board implies I've gone around [Wells Fargo CEO John] Stumpf, the guy who is under fire," Buffett told CNBC. "I've talked to no one else on the board."

Stumpf is now long gone. But there's reason to believe that this might not have been enough to appease the Oracle of Omaha.

Buffett's refusal to come to Wells Fargo's defense speaks volumes. He's had glowing things to say about the bank in the past, and particularly in his 1990 letter to Berkshire Hathaway shareholders, which laid out his rationale for investing in the bank in the first place.

He's also heaped praise on other banks that have come under siege since the financial crisis. The most analogous case was Bank of America (NYSE:BAC), in which he invested $5 billion worth of Berkshire Hathaway's money in 2011, at the nadir of the North Carolina-based bank's financial crisis-related troubles.

"Bank of America is a strong, well-led company, and I called [CEO Brian Moynihan] to tell him I wanted to invest in it," Buffett said in a statement at the time. "I am impressed with the profit-generating abilities of this franchise, and that they are acting aggressively to put their challenges behind them. Bank of America is focused on their customers and on serving them well. That's what customers want, and that's the company's strategy."

More recently, Buffett weighed in last year when Bank of America's shareholders were faced with the decision of whether to split the roles of chairman and CEO, both of which were (and continue to be) held by Moynihan. "If I could vote, I would vote as management suggests, which is to have Brian take on the CEO and chairman job," Buffett told CNBC in September 2015. "He took a company that was just a terrible mess," and turned it around, said Buffett.

Given this, Buffett's silence on Wells Fargo is deafening. This is especially true when you consider how adverse he is to being associated with any kind of scandal.

Lose a shred of reputation, and I'll be ruthless

Years ago, he was investigated by the Securities & Exchange Commission, which had become suspicious of the haphazard way that Buffett and now-vice chairman of Berkshire Hathaway Charlie Munger had structured intermingled holdings between their investment vehicles. Both were cleared of any wrongdoing, but it taught Buffett the importance of avoiding scandal.

He got a second lesson in the early 1990s by way of his investment in Salomon Brothers, which was caught rigging the U.S. Treasury bond market. It was during Congressional hearings into the scandal that Buffett, who had reluctantly taken the helm at Salomon Brothers to steer it through the crisis, uttered his now infamous warning to those who work for him: "Lose money for the firm, and I'll be understanding. Lose a shred of reputation for the firm, and I will be ruthless."

This goes a long way toward explaining why Stumpf is no longer with Wells Fargo. After Stumpf's first public comments on the scandal, made on Jim Cramer's Mad Money, Buffett told Stumpf that the problem at the bank was bigger than Stumpf seemed to think. Buffett is also purported to have told Stumpf that the size of the CFPB's fine "was not a metric to use in determining public reaction."

It's clear now that Buffett was right. In the intervening time, not only have we learned that Wells Fargo's fraud systematically targeted the most vulnerable members of society -- elderly people living on fixed incomes, young customers with no knowledge of banking, and immigrants who spoke little English -- but we've also come to find out that the bank retaliated against employees who had been blowing the whistle on the scandal for years.

Given this, you'd be excused for thinking that Warren Buffett will follow the same playbook that he did with Salomon Brothers -- to cut and run as soon as he gets an opportunity.

So, why wait until November?

This brings us to the most important question: Why would Buffett wait until November to share his opinion on Wells Fargo's scandal? He is, after all, the single largest shareholder in the bank.

One reason may be that Buffett wanted to see how events unfolded, to get a better sense for the reputational damage suffered by the bank. This is reasonable, though it doesn't preclude the possibility that Buffett is using the time to unload his shares, as things have only gone from bad to worse on this front.

A second, albeit related reason may be that Buffett needed time to quietly sell Berkshire Hathaway's 10% stake in the bank prior to publicly disclosing the conglomerate's holdings in the middle of next month in its 13F filing. Any insinuation that he's doing so would cause the bank's shares to plummet, thereby impairing the value of Berkshire's holding. Consequently, it makes sense that Buffett would choose to do so quietly -- just as he does when he's acquiring an interest in a company,

Further fueling suspicion that Buffett could be in the process of doing this very thing are comments from Wells Fargo's new CEO Tim Sloan. Here's an excerpt of what he told employees earlier this week: "You also should expect more tough headlines, as additional accountability actions occur, and other investigations and reviews are completed. Some of that is going to be very painful for us."

To say that "additional accountability actions" are on the way and that some of them will be "very painful," could certainly lead one to conclude that he's referring to, among other things, news that Buffett is abandoning the bank. This is speculation, of course, but it certainly doesn't seem unreasonable.

In short, investors in Wells Fargo should steel themselves for the worst next month. If Buffett decides to stick with the bank, there's likely to be little response. But if his 13F shows that Berkshire Hathaway has decided to cut ties with Wells Fargo, it could get ugly.