Oil tallied its first weekly loss in over a month, slumping about 4% amid uncertainty about this weekend's producers meeting, where OPEC will discuss a proposal to cut output. That said, crude's drop was what that drove oil stocks down this week. Instead, earnings were the primary culprit weighing on share prices. According to data from S&P Global Market Intelligence, the biggest losers were Superior Energy Services (NYSE:SPN), Weatherford International (NYSE: WFT), Nordic American Tankers (NYSE:NAT), Sanchez Energy (NYSE: SN), and CVR Refining (NYSE:CVRR). 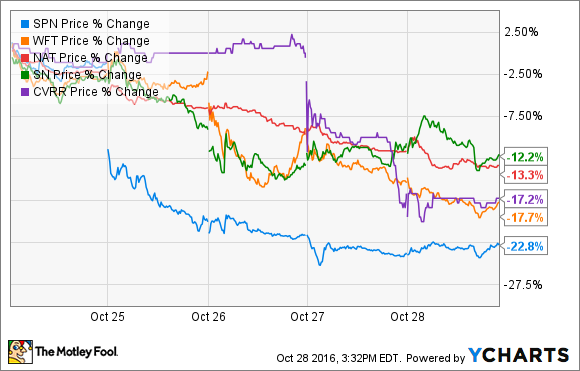 Oil-field service provider Superior Energy Services slumped after reporting a much deeper-than-expected loss, which showed continued deterioration in the company's results. Those poorly received results caused several analysts to downgrade the stock. Citi, for example, downgraded Superior Energy Services from buy to neutral and slashed its price target from $22 to $19. Meanwhile, Scotia's Howard Weil lowered it to sector perform from focus stock while cutting its price target from $25 to $20. That said, not everyone agreed, with Morgan Stanley calling Superior's miss a buying opportunity, reiterating its overweight rating and $25 price target.

Fellow oil-field service company Weatherford also got walloped after reporting earnings. Like Superior, Weatherford reported a wider-than-expected loss as operating conditions remained difficult. That said, the company did see a sequential increase in North American revenue. Furthermore, its CEO declared that the "market is slowly turning" and that the fourth quarter is the beginning of the long-awaited turnaround in the oil market.

Refining MLP CVR Refining likewise reported weak quarterly results, with earnings of $0.11 per share, which missed the consensus estimate by $0.15 per share. One of the primary contributors to the company's poor results, according to CEO Jack Lipinski, is the "exorbitant costs of Renewable Identification Numbers (RINs) under the broken Renewable Fuel Standard (RFS) program." Because of that, and other issues, the partnership has decided not to pay a cash distribution this quarter.

Oil driller Sanchez Energy's slide this week was due in large part to merger and acquisition activity. The company announced on Monday that it sold some of its Eagle Ford properties to Carrizo Oil & Gas for $181 million. In addition to that, reports later in the week said that the company is in talks to partner with a leading private equity fund to buy Anadarko Petroleum's south Texas oil and gas assets in a deal that could be worth up to $3.5 billion. Given Sanchez's current sub-$2 billion enterprise value, such a deal would be quite large for the company to swallow.

Nordic American Tanker, likewise, sank on expansion news. That came after the company entered into an agreement with a shipyard to construct three new tankers for delivery in the second half of 2018. These new vessels will increase the company's fleet to 33. While Nordic believes that these new additions will bolster its dividend capacity, investors will have to wait until 2018 to see if that is the case.

Investors punished companies that missed earnings expectations this week. Likewise, they also sold off those that are working on major expansions opportunities because falling crude prices made investors uneasy. That said, if the oil market is in the early stages of recovering, then this week's sell-off could soon be a distant memory.