If you're thinking about buying JPMorgan Chase's (NYSE:JPM) stock, the first question you should ask yourself is whether it's cheap or expensive. Unfortunately, the answer is: neither. But this doesn't mean you should avoid its stock.

A wonderful company at a fair price

No one who follows bank stocks closely would argue right now that JPMorgan Chase's stock is cheap. To be considered cheap in the context of bank stocks a bank's shares need to trade below book value.

This is the case at Bank of America and Citigroup, shares of which are priced at approximately 30% discounts to book value. In other words, investors think these banks are worth roughly a third less than the banks claim to be.

JPMorgan Chase, by contrast, trades for an 8% premium to its book value. Compared to Bank of America and Citigroup, it's clear that JPMorgan Chase's stock is far from cheap.

Yet, shares of the nation's biggest bank by assets aren't expensive either. Typically speaking, for a bank stock to be considered expensive, it would have to trade for two or more times book value.

Few banks trade at such high multiples today, given the hangover from the financial crisis, which has caused short-term interest rates to hover right above 0% for much of the past decade. Because this weighs on the profitability of banks' loan and securities portfolios, it's also reflected in the valuation of their shares.

The net result is that JPMorgan Chase's shares are neither cheap nor expensive right now.

By most knowledgeable accounts, the New York-based megabank is an incredibly well-run company. It's efficient, with an efficiency ratio of 59% in the latest quarter. This means that 41% of its revenue is left over after operating expenses are deducted to cover loan losses, income taxes, and then to distribute to shareholders. Most other banks, by contrast, have efficiency ratios in excess of 60%.

JPMorgan Chase is also in a commanding position on Main Street, through its robust commercial banking operations, and on Wall Street, by way of its investment bank. This gives it a diversity of revenue streams that can help offset fluctuations in the business cycle, making it a more stable holding for risk-averse investors.

Finally, JPMorgan Chase pays a generous and growing dividend. Its stock currently yields 2.8%. That ranks it sixth on the KBW Bank Index, which tracks shares of two dozen blue-chip bank stocks. And it means that owners of JPMorgan Chase's shares earn considerably more in dividend payments than owners of the typical stock on the S&P 500, which yields 2.1%. 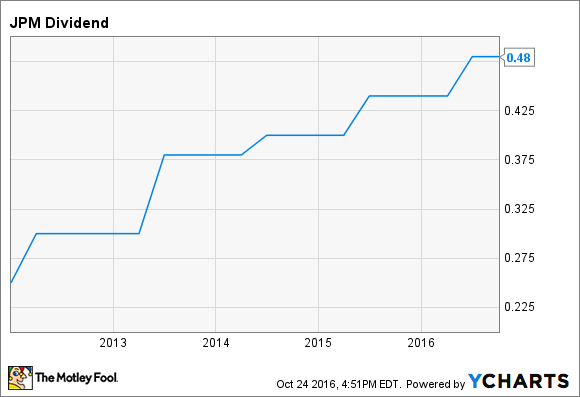 While JPMorgan Chase certainly isn't a screaming bargain, I believe it's reasonably priced and offers considerable room for growth once interest rates begin to rise in earnest.