Shares of Brocade Communications (NASDAQ:BRCD) soared on Monday after Bloomberg reported that the company is in the final stages of a sale process. According to Bloomberg's sources, Broadcom (NASDAQ:AVGO) is among the potential suitors, although the company declined to comment. At 3 p.m. EDT, Brocade stock was up about 21%, while shares of Broadcom had risen 1%.

Brocade sells networking hardware, including switches and routers, as well as networking software and services. The company competes with industry giant Cisco Systems, which enjoys a dominant position in the switching and routing markets.

Shares of Brocade have been trending downward since peaking in mid-2015. Revenue has been stagnant for the past few years, although profits have risen in recent years. Following Monday's rise, Brocade sports a market capitalization of about $4.6 billion, a small fraction of Broadcom's $69 billion market capitalization. 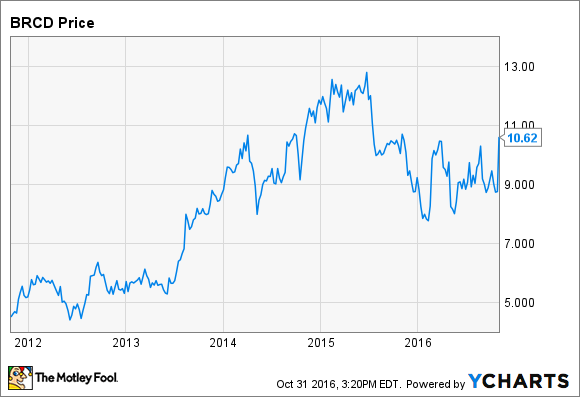 Broadcom sells chips that power networking hardware like switches. If the company were to acquire Brocade, it could be a force to be reckoned with in the networking hardware business. While the talks are reportedly nearing completion, there is no guarantee that a deal will be reached, and it's possible that there are other companies involved in the process.

By acquiring Brocade, Broadcom would be able to capture more revenue from the growing cloud computing market. Brocade has struggled to grow in the shadow of industry behemoth Cisco, and a combination of the two companies could give Brocade a much-needed boost.

An acquisition could be announced as soon as this week, according to Bloomberg's sources. As always, buying a stock solely due to acquisition rumors is rarely a good idea.