In late summer and early fall there were signs that Macau may finally be on a path to recovery. August gaming revenue rose 1.1%, and September revenue was up 7.4% after Wynn Resorts (NASDAQ:WYNN) opened Wynn Palace and Las Vegas Sands (NYSE:LVS) opened The Parisian. But recently released gaming data from October shows that the recovery really has legs.

Last month, Macau's gaming revenue jumped 8.8% to $2.7 billion and hit the highest level since January 2015. And it may finally be good news for gaming investors.

This recovery has legs

The chart below shows the last 22 months of gaming data from Macau. You can see that for most of 2015 Macau was in steep decline. But since bottoming out in June, the recovery has been fairly steady. 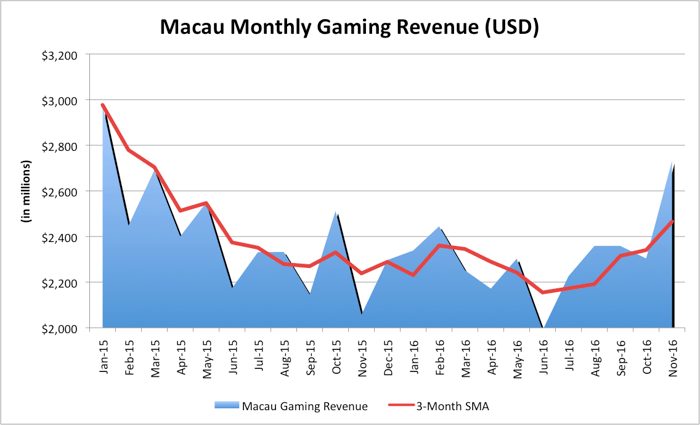 The trend going forward may not be straight up, but it looks like the region is bouncing off old lows and is on the path to recovery. Some of the bounce could be because of new resorts, which may not last forever, but investors are hoping the general trend lasts.

A recovery could save gaming stocks

Macau recovering now is key for Wynn Resorts, Las Vegas Sands, Melco Crown (NASDAQ:MLCO), and MGM Resorts (NYSE:MGM). Without a recovery, new resorts from each company would cannibalize existing properties and would result in a reduction in net income and cash flow overall. Macau needed to grow just for profits to stay flat.

The region may still need double digit growth for earnings to remain flat versus the first half of 2016, but it looks like that's not out of the question at this point.

How will gaming companies manage this recovery?

If Macau stages a small but unimpressive recovery, gaming companies will have a number of choices as to what they do from a financial perspective. Remember that even the down market in Macau left gaming companies with billions of dollars in cash flow, so they'll be able to spend that money on something in coming years.

They could pay dividends, which has been the choice of all four of the U.S.-traded companies to one extent or another. Or they could pay down debt and de-risk their businesses in the case of a downturn. Wynn, in particular, could use this as an opportunity to reduce debt from building the $4.4 billion Wynn Palace, which has stretched the balance sheet.

At least investors can see a little bit of light at the end of the tunnel for gaming stocks. And in coming months we'll see just how bright that light is.