What happened at TrueCar during the quarter

With revenue, units purchased, and dealer partners at all-time highs, TrueCar's third-quarter results built on CEO Chip Perry's vision for the company. Perry joined TrueCar late in 2015 after an upheaval that included the departure of founder Scott Painter and several key executives. Perry immediately began an overhaul of TrueCar's operations in an effort to improve its contentious relationships with dealers, which he saw as the key factor holding back the company's growth.

Those relationships have improved throughout 2016, and the overall business has responded well. TrueCar ended the third quarter with 10,759 franchise dealer partners, up 6.2% from the end of the second quarter and its highest total ever. ("Franchise dealers" are those that hold a franchise from one or more automakers -- in other words, they're dealers that sell one or more brands of new vehicles. Independent dealers typically sell only used vehicles.) 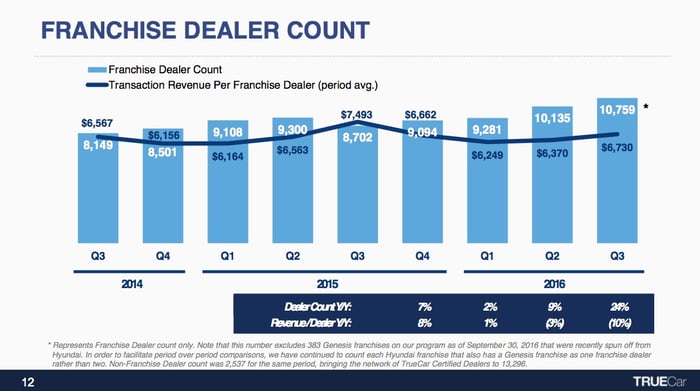 Users of TrueCar's service, which matches car shoppers with dealers offering a guaranteed price, purchased 220,633 units from TrueCar's dealer partners, up 6% from a year ago and another record. 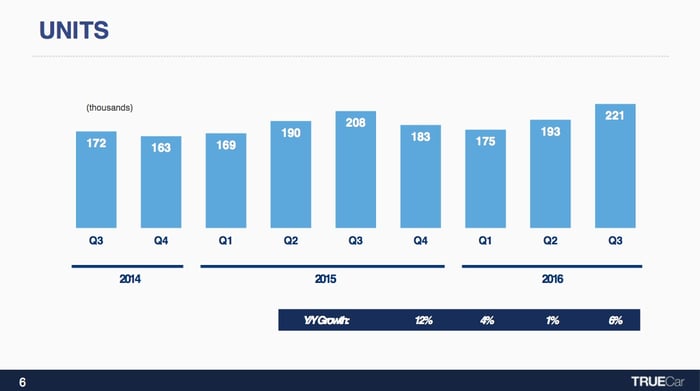 That translated into a 4.3% year-over-year increase in transaction revenue and a record adjusted EBITDA of $5.8 million with a margin of 7.7% 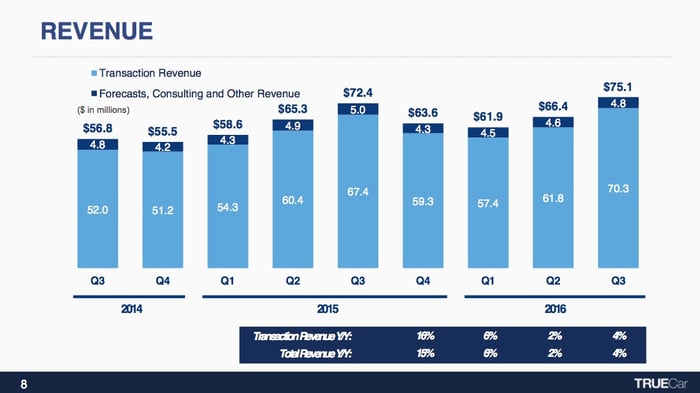 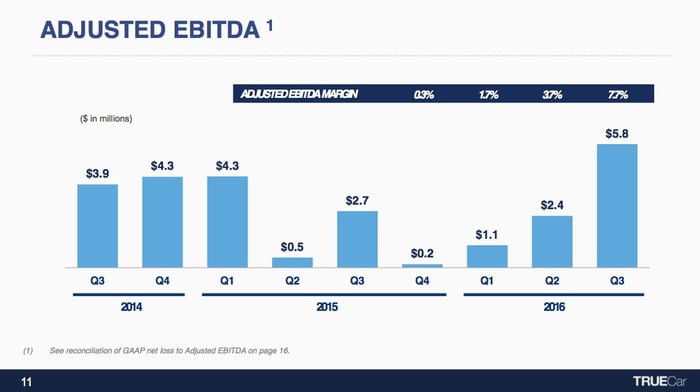 Under Perry, TrueCar has also made significant changes to its online tools, in an effort to increase the percentage of unique visitors who register to fully participate in the company's marketplace. Perry said that effort is also beginning to bear fruit, with the conversion rate in its direct-to-consumer channel up almost 20% from the second quarter.

Long story short: After a troubled 2015, Perry has most of the company's key metrics moving in the right direction.

What TrueCar executives said about the quarter

"In the third quarter, we achieved record results on virtually every metric across the company," Perry said during TrueCar's earnings call. "Although there are still many areas where we can improve, it's also becoming even more clear that there are many opportunities to grow and expand our business significantly by enhancing the value we provide our consumers, dealers, and OEMs. I'm really excited about where we can take this company."

"We are really pleased with the financial results in the third quarter," CFO Mike Guthrie said during the earnings call. "Since the beginning of the year we've been making significant investments in three focus areas: dealer sales and service, product and technology, and consumer and dealer research. Each of these investments is yielding excellent returns and, as a result, we not only exceeded guidance on units, revenue, and adjusted EBITDA in Q3, but we also set ourselves up to build on these improvements as we finish 2016 and head into 2017."

Looking ahead: TrueCar's guidance for Q4 and the full year

TrueCar's guidance for the fourth quarter: