In 2015, high-flying market darling Spirit Airlines (NYSE:SAVE) fell out of favor among investors. The stock plunged more than 60% from its all-time high around $85, finally bottoming out around $33 late last year.

Since then, shares of the budget airline have been recovering in fits and starts. That process continued in October, as Spirit Airlines stock rose 12.7%, according to data from S&P Global Market Intelligence. 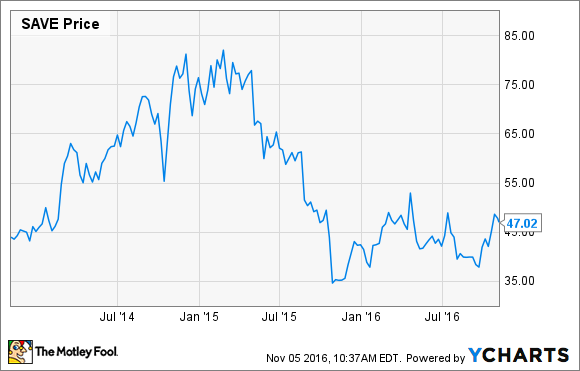 The bulk of Spirit's gains last month came after the company released a bullish investor update on Oct. 17. That update revealed that Spirit Airlines had outperformed its unit revenue guidance in Q3.

Total revenue per available seat mile (TRASM) fell 7% year over year last quarter, compared to management's initial expectation of a 9% decline. That was a huge improvement from Q2, when TRASM sank 14.3%.

Investors got more good news later in the month. In conjunction with Spirit's Q3 earnings report, management forecast that TRASM will decline just 3%-4.5% year over year in Q4. This puts the company on track to return to unit revenue growth in early 2017, which is the first step toward resuming its long-term trend of steady double-digit revenue and earnings growth.

Spirit Airlines stock trades at a very modest valuation of less than 12 times earnings. That makes it look like a bargain, considering that Spirit has the potential to grow at a double-digit pace for many years to come.

For its earnings multiple to improve, Spirit needs to show that its profit margin is stabilizing. That almost certainly requires a return to unit revenue growth. If Spirit Airlines can get TRASM to start rising again in the next few quarters, the stock could continue to rally.

Why Spirit Airlines Stock Rose 12.7% in October @themotleyfool #stocks $SAVE Next Article
Current