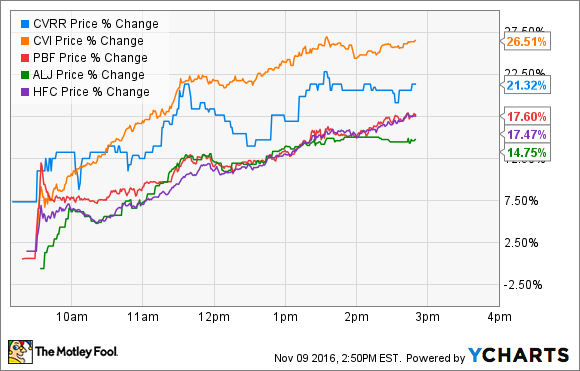 Fueling today's rally is speculation that Trump will ease costly renewable fuel regulations that are hurting independent refiners. Driving that belief is a fact sheet published by the Trump campaign earlier this year in which he called for the elimination of the system of buying and selling biofuel blending credits, which are also known as renewable identification numbers, or RINs. The current system requires refiners to buy credits to meet biofuel blending requirements and has been particularly costly to independent refiners, which are those that don't own a retail arm.

The exorbitant costs of renewable identification numbers (RINs) under the broken renewable fuel standard (RFS) program continue to negatively impact our overall financial results. The Environmental Protection Agency (EPA) must change the point of obligation and pull back on its proposed 2017 renewable volume obligations (RVOs) before escalating RIN prices cause irreparable harm to merchant refiners. The EPA is now in the process of literally destroying small and medium-sized merchant refineries like ours that do not control the blending and retail sale of their fuel. It is absurd that the EPA continues to punish and ruin merchant refineries that have done nothing wrong when the EPA itself admits that the RFS program is not working.

Several other refiners recently noted the negative impact the current system is having on their financial results. PBF Energy, for example, noted this past quarter that the company's results "experienced the added headwind of a 15% increase in the cost of compliance with the renewable fuels mandate." Meanwhile, HollyFrontier said that one of the issues impacting it during the third quarter was "escalating costs associated with the RFS mandate." Suffice it to say, the elimination of the current system would remove a significant headwind.

Adding fuel to today's rally is that Carl Icahn -- a Trump supporter -- is a major investor in CVR. Given his support, as well as the fact that independents call the RIN system "rigged," suggests that this could be a top agenda item for Trump and his America first energy policy.