Shares of DryShips (NASDAQ:DRYS) surged on Monday, up more than 60% by 11:45 a.m. EST. Today's rise is the continuation of the company's epic run over the past week: 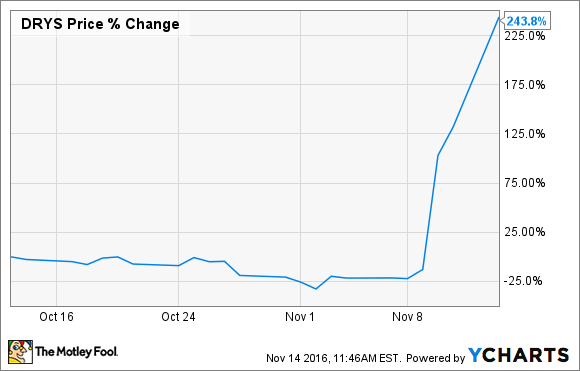 Fueling that run are two drivers. First, the company is actively working with lenders to restructure its bank credit facilities. Three of them have matured, and the company has yet to make final balloon payments, instead suspending principal and interest payments to preserve liquidity. However, the company has been actively selling off vessels to pay down its revolving credit facilities. For example, at the end of October, it announced the sale of five vessels for $29.4 million. Given the steps it is taking to address its credit facilities, there's some growing optimism in the market that DryShips can restructure in a way other than going through bankruptcy.

In addition to that, the Baltic Dry Index (BDI) has rebounded sharply in recent weeks, going from 800 in late October to more than 1,000 in the last few days. The index suggests that demand for shipping capacity has started to increase, which would be good news for DryShips because it can start charging more money for capacity on its ships. The surge in the BDI has been pronounced since the election due in part to the belief that Donald Trump's presidency might lead to better economic growth and more trade.

As a deeply indebted, heavily shorted stock, DryShips is surging on some hints of optimism that it might not sink into bankruptcy. That said, the company has yet to secure a deal with lenders, and there is absolutely no guarantee that it will. Moreover, the recent spike in the BDI does not necessarily mean the price of shipping capacity will remain elevated. Because of this, DryShip's stock could continue to be quite volatile in the future until there's more certainty about both its financial situation and capacity pricing in the shipping sector.