Executives at Wells Fargo are almost certainly feeling a sense of relief as the media's attention has shifted away from the bank's fake account scandal in favor of the presidential election. Image source: iStock/Thinkstock.

Donald Trump's victory in last week's presidential election may have ushered in a renaissance for bank stocks, as shares of the KBW Bank Index have climbed 12% since closing on election day -- i.e., before the results were known.

But even though all banks have benefited from the post-election trend, few have gained as much from the election as Wells Fargo (NYSE:WFC).

When I say that Wells Fargo benefited from the election, I'm not just talking about its stock price. Though, it's worth pointing out that the California-based bank has done well on this front. 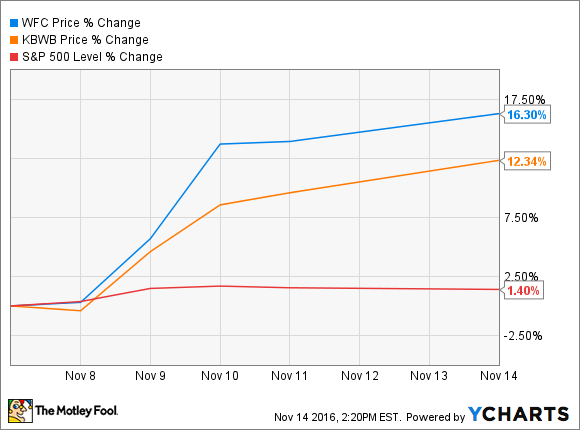 Wells Fargo's shares are up 16% since Trump prevailed as the president-elect. That handily outperforms not only the KBW Bank Index, but also the S&P 500 more generally. The latter has climbed a mere 1% over the same stretch.

What I'm talking about instead is the fact that Wells Fargo now faces much less headline risk than it did before the election.

Given all that's happened over the past week it may seem like a lifetime has passed since the election, but only two weeks ago Wells Fargo found itself still smackdab in the middle of its festering fake-account scandal. In an effort to increase the bank's performance and meet sales objectives, employees at the bank had opened up to 2 million accounts for customers without the latter's approval.

Making things worse, news reports since then have suggested that Wells Fargo retaliated against whistleblowers who brought the fraud to management's attention. This translated into countless negative headlines about Wells Fargo in newspapers and other media outlets on a daily basis.

The negative attention, however, was all brought to an end by the election results, which stunned the nation and triggered protests in cities throughout the country. This shift in focus is a positive development for Wells Fargo, as it reduces the headline risk that was weighing on the bank's stock.

But it gets even better...

The good news for Wells Fargo doesn't just stop with lower headline risk. In fact, it gets better.

Had the democratic party prevailed in the election, taking both the White House and the Senate, there's little doubt that Wells Fargo would have been at the center of multiple government investigations. Democratic Senator Elizabeth Warren had gone so far as to accuse the bank of criminality and asked the Securities & Exchange Commission and the U.S. Department of Justice to investigate whether charges should be filed.

But with the republican party maintaining control of the both houses of Congress as well as securing the White House, there's reason to believe that the brunt of the scandal will now fall on bank industry regulators. It seems odd that this would be the case, but if you watched the congressional hearings two months ago into Wells Fargo, then you probably aren't surprised.

In addition to lambasting Wells Fargo for its conduct, republican lawmakers excoriated the Consumer Financial Protection Bureau for not catching the fraud earlier. The intimation was that the CFPB is an all-but unnecessary government agency.

With the republicans now in charge of all three branches of government, it thereby seems likely that they'll scale back not only financial regulations in general, as they've promised, but consumer financial protection laws in particular. Moreover, with a new attorney general taking office in January, there's reason to believe that any investigations by the DOJ could be dead in the water.

In light of these developments, it seems safe to say that few are as relieved with the outcome of the U.S. presidential election as Wells Fargo and its shareholders.