Please ensure Javascript is enabled for purposes of website accessibility
Log In Help Join The Motley Fool
Free Article Join Over 1 Million Premium Members And Get More In-Depth Stock Guidance and Research
By Rich Smith - Updated Nov 19, 2019 at 9:38AM

SpaceX embarks on a mission to provide internet service to everyone on the globe -- if they can pay for it.

Do you hate your internet service provider?

Given a choice, would you switch to someone else?

Would you even consider... SpaceX? 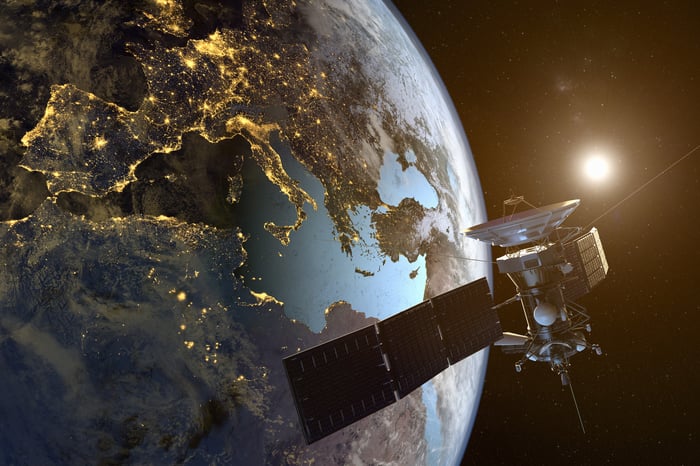 Over in California, space pioneer SpaceX has teamed up with Alphabet (GOOG -2.27%) (GOOGL -2.46%) on an audacious plan to place a constellation of 4,425 broadband internet satellites in orbit around the Earth. Fanning out across the skies, and blasting out internet in the Ku and Ka frequency bands from an altitude of approximately 715 miles in the air (Low Earth Orbit, or LEO), the first 1,600 satellites promise to offer "continuous" internet service to "the fifty states, Puerto Rico and the U.S. Virgin Islands." When fully constituted, the constellation should cover "virtually all parts of the Earth's surface," providing "ubiquitous global service" to every point on the globe.

Helped by financial backing from Fidelity and Alphabet, SpaceX believes it can create this system in as little as five years, and at a cost of just $10 billion. And once it does...

This is a popular idea -- popular enough that competing aerospace firms Airbus (EADSY -2.49%) and Boeing (BA -3.42%) have both signed on to rival ventures to create satellite internet systems in space. SpaceX appears to have the lead, however, and it widened that lead last week when it filed a 100-plus-page application with the Federal Communications Commission to begin putting its plan into effect.

There is, however, the small matter of paying for it.

And a costly idea

SpaceX says each satellite will mass 386 kilograms. Multiplied by 4,425 satellites total, therefore, the combined mass of the constellation should equal approximately 1,708.5 tons. Even if SpaceX does all the launch work itself (as it probably will), SpaceX's average launch cost is $11.3 million per ton. That works out to a total cost of $19.3 billion to put the satellite constellation in orbit.

$19.3 billion, however, is twice the $10 billion initial estimate of the system's cost back when SpaceX first floated the idea of providing broadband internet in 2015. What's more, it doesn't even include the cost of building the satellites themselves, much less operating the system, or replacing it when its satellites reach the end of their lifespan.

According to SpaceX, the satellites comprising its internet broadband network will have lifespans of as little as five years, requiring wholesale replacement of the constellation twice a decade. This implies that SpaceX's cost of providing satellite internet to the world won't be $19.3 billion period, but more like $38.6 billion (or more) every 10 years.

Who's going to pay for all this?

Meanwhile, back on planet Earth, SpaceX's entire launch operation remains grounded while the company works to provide a solution to the rocket refueling system that caused one of its rockets to blow up in September. SpaceX says it's finally figured out what went wrong. (Super-chilled oxygen pumped into the rocket's fuel tanks accidentally got too cold. It actually morphed into a solid that reacted with a carbon composite helium holding tank, compromising the tank and igniting an explosion.)

SpaceX also believes it will figure out a fix to the phenomenon that permits it to resume operations in mid-December, which is great news. But SpaceX has been collecting neither revenue nor profits for nearly three straight months now as it worked to identify the problem, and it could be nearly another month before it can put a hoped-for solution into practice. Even in the best case, by the time SpaceX returns to orbit, its operations will have been grounded -- and revenue-less -- for a total of 10 months out of the past 18.

With no money coming in the door, but plenty of money still going out (FCC applications, and FCC lawyers, don't come cheap), there's a very real question of how SpaceX is going to pay to put its satellite internet plan into effect. While an IPO might help to solve that problem, SpaceX CEO Musk remains very much opposed to that idea.

Memo to Alphabet: Don't be surprised if Mr. Musk comes knocking at your door again soon, asking for another check.

Rich Smith does not own shares of, nor is he short, any company named above. You can find him on Motley Fool CAPS, publicly pontificating under the handle TMFDitty, where he's currently ranked No. 314 out of more than 75,000 rated members.

Suzanne Frey, an executive at Alphabet, is a member of The Motley Fool's board of directors. The Motley Fool owns shares of and recommends Alphabet (A shares) and Alphabet (C shares). Try any of our Foolish newsletter services free for 30 days. We Fools may not all hold the same opinions, but we all believe that considering a diverse range of insights makes us better investors. The Motley Fool has a disclosure policy.