George Soros' namesake fund known as Soros Fund Management has continued to show interest in the beaten-down biotech space this year -- even as most of its hedge fund peers have run for cover due to the political headwinds emanating from the U.S. presidential election.

It's not surprising to learn via recently released 13-F filings that the Soros Fund opened up relatively small, and perhaps speculative, positions in Acadia Pharmaceuticals (NASDAQ:ACAD), Amgen (NASDAQ:AMGN), Biogen (NASDAQ:BIIB), BioMarin (NASDAQ:BMRN), and Opko Health (NASDAQ:OPK) during the third quarter of 2016.

Although it's never a good idea to blindly follow billionaires like George Soros into or out of stocks, there's no doubt that superinvestors have a disproportionate influence on market sentiment toward individual stocks or entire sectors -- making it worthwhile to know what they are buying or selling on a quarterly basis. In light of this reality, let's consider if everyday investors should take a cue from the Soros Fund on these particular biotech names.

Acadia's stock got hammered earlier this year leading up to the April approval and launch of its new Parkinson's disease drug Nuplazid. Investors seemed to be concerned that doctors would be hesitant to prescribe the drug. However, those fears were alleviated when the drug's Q3 sales absolutely crushed the Street's consensus, sparking a healthy rally in Acadia's stock and quelling at least some doubts about Nuplazid's commercial potential.

The stark reality, though, is that the biotech's shares are still trading at a questionable 24 times the Street's high-end revenue estimate for 2017, perhaps reflecting the market's optimism pertaining to a potential buyout. Given this rather rich valuation and a long road still ahead for Nuplazid's commercialization, it's hard to see how Acadia's stock can push much higher in the near term -- that is, unless an eager buyer does come forward.

Amgen is a low-growth but high-value stock

Like many of its peers, Amgen is in the middle of a major transition within its product portfolio, thanks to increasing competition for top-selling drugs like the autoimmune disease medication Enbrel, the anemia treatment Epogen, and the white blood cell booster Neupogen. Fortunately, the biotech's bevy of growth products such as the secondary hyperparathyroidism drug Sensipar and the bone disease med Prolia have helped to offset these declines to a large degree in recent quarters.

The net result is that Amgen's top line is on track to grow by a tad over 3% next year, despite the expected drop-off in performance from a handful of key mature products.

Apart from Amgen's modest top line, the biotech does offer a healthy dividend yield of 2.75%, a monstrous cash position of nearly $38 billion, and sizable free cash flows over the past year of almost $9 billion. So, while Amgen will certainly need some luck on the clinical front to boost its near-term growth prospects, the company is well-positioned to eventually push past these headwinds.

Biogen has hung tough this year

Despite a tumultuous year for biotechs in general, Biogen has eked out a small gain in 2016: 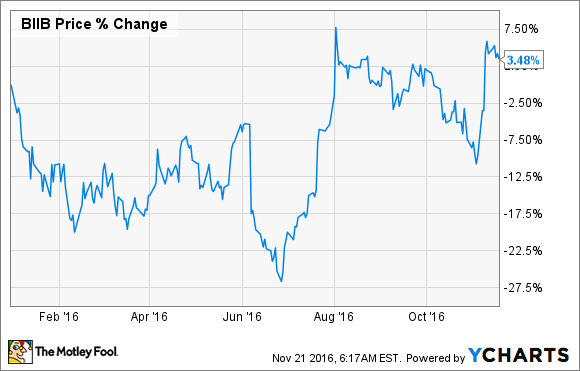 Biogen's modest success is the result of the stronger-than-expected performance of its top-selling multiple sclerosis (MS) drug Tecfidera in the third quarter, along with the clinical success of Spinraza (nusinersen) as a candidate to treat infantile onset spinal muscular atrophy that could provide the biotech with its next blockbuster product.

The fly in Biogen's ointment, though, is that numerous companies are attempting to cut into the biotech's overwhelming share of the MS drug market at the moment, and its clinical efforts to defend its territory have run into multiple setbacks over the past year. The long and short of it is that Biogen will need to either hit a home run with its moonshot Alzheimer's disease drug aducanumab, or turn to the M&A scene to stave off a marked decline in its top line in the next year or so.

When it comes to biotechs with rich valuations, the orphan drug specialist BioMarin is nearly always close to the top of the list. The underlying reason is that orphan drugs confer a number of highly coveted benefits for their manufacturers, such as premium pricing schemes that tend to fly under the radar of payers. Moreover, BioMarin is easily one of the top orphan drug companies in the world with five products on the market and a rich clinical pipeline that sports potential blockbusters like vosoritide for achondroplasia (a form of short-limbed dwarfism).

Although the biotech did make a fairly large error by acquiring fledgling company Prosensa for its experimental Duchenne muscular dystrophy drug Kyndrisa that was subsequently rejected by the FDA, BioMarin does have an overall strong track record of rapidly developing novel therapies for rare diseases. So, if you're looking for exposure to this niche pharma market, BioMarin should probably be on your list, despite its elevated valuation relative to the broader biotech landscape.

Opko Health is a highly diversified healthcare company with multiple irons in the fire. But the company's near-term value proposition can arguably be distilled down the success -- or failure -- of its newly approved vitamin D prohormone, Rayaldee, indicated as a treatment for secondary hyperparathyroidism.

The big picture issue at play here is that Rayaldee's addressable market has been estimated to be as large as $12 billion per year -- although some skeptics have suggested otherwise, predicting that the drug's sales will peak at around $500 million. Regardless, this new drug should turn out to be a key growth driver for the company moving forward. The Street, after all, is forecasting Opko's top line to rise by nearly 16% in 2017, based primarily on Rayaldee's projected commercial performance.

Having said that, Opko Health will probably remain cash-flow-negative next year and may even need to raise capital sometime soon to fund its ongoing operations. While cash flow problems shouldn't necessarily be a deal breaker for investors in this case, this issue is likely a big reason why the company's shares are only trading at four times its 2017 estimated revenue.

Are any of these biotech stocks screaming buys right now?

Amgen, BioMarin, and Opko Health are all arguably worth a deeper dive based on their longer-term value propositions. But Acadia and Biogen still have some serious work to do to lower their risk profiles moving forward. All in all, these Q3 Soros biotech buys seem to me to be best suited for a watch list, as none of them qualify as outright screaming buys right now.