The future of weapon sales, both for guns and for less-lethal alternatives, has been on a strange path the past few years, and that impacts the way investors should look at Smith & Wesson Holding Corp (NASDAQ:SWBI) and TASER International, Inc. (NASDAQ:AXON). Gun sales have risen, but surges have largely been driven by political fear, and taser sales have increased in response to gun violence.

Heading into 2017 and a Donald Trump presidency, which stock is the better buy? Let's take a look.

Where do gun sales go from here?

On the surface, Smith & Wesson looks like a long-term growth stock that's riding a strong trend of gun sales in the U.S. But the reality is that gun sales spiked when President Obama was elected and re-elected and every time there's a mass shooting. The threat of gun regulation leads to improved financials for the company. 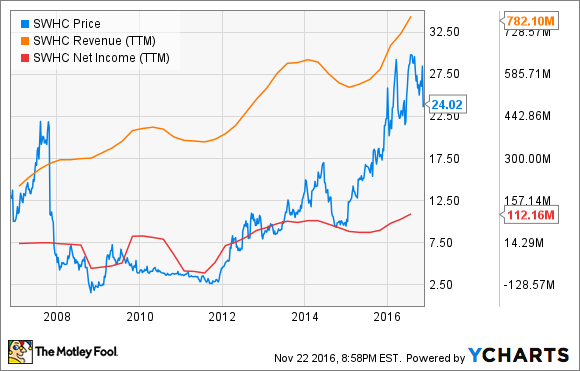 Shares of Smith & Wesson trade at just 12 times earnings today, but given the election, I think 2017 will be a down year. And that makes the value of the stock a little less compelling for investors.

The growth of less-lethal weapons and body cameras

The wave TASER International has created and ridden over the last few years is one of increased less-lethal weapon sales and body cameras. Tasers are its biggest segment, accounting for $52.9 million of the company's $71.9 million in sales last quarter. But if you're going to buy TASER, it should really be for the booming body camera business. 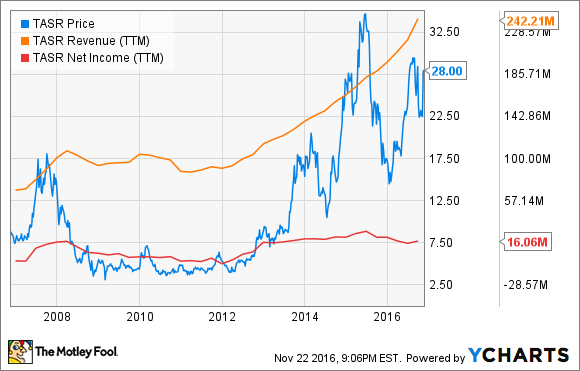 Axon body camera segment sales of $18.9 million last quarter may not seem impressive, but the backlog of future contracted revenue -- and profits -- certainly is. When most customers buy a body camera, they also sign up for a contract to store video on Evidence.com. That'll be the company's growth driver long-term. At the end of September, future contracted revenue of Axon and Evidence.com sales were $302 million and growing.

What makes the body camera business incredibly profitable is the margin on that contracted revenue. Last quarter, Axon service segment (Evidence.com) margin was 81%, which was up from 67% a year ago. As body camera sales and usage grow, the bottom line will as well. And that's what makes this a growth stock for years to come.

Which weapons company is better for your portfolio?

Smith & Wesson is the more established company and has a better valuation, but I'm afraid the next few years will see sales fall significantly given the lack of policy pressure on gun sales.

TASER International, on the other hand, is just beginning to show its operational momentum, and profits should grow as Axon body cameras end up in more law enforcement agencies around the world. And it's that growth potential that makes TASER International a better stock for investors looking to add a weapons company to their portfolios right now.