The vehicle segments at Polaris Industries Inc. (NYSE:PII) and Harley-Davidson Inc. (NYSE:HOG) have had a tough time in the past year. Demand is down as traditional customers in the oil and gas industries continue to suffer.

Why Polaris had a terrible year

The poor performance at Polaris can largely be blamed by recalls of the popular RZR and Slingshot products, which impacted costs and reduced new sales during the year. RZR was particularly problematic, resulting in multiple recalls, including a fire hazard recall in September that ground sales to a halt.

What's not yet clear about the recalls and resulting loss of sales is whether those customers are coming back. This could be a temporary setback or it could damage the brand for years to come. Before the recalls, off-road vehicles and Slingshot were the company's growth engine, so it will be an important category going forward.

The excitement for motorcycles is gone

In Harley-Davidson's results, you can see that demand for motorcycles is in a broad decline as well. In the U.S., motorcycle sales revenue was down 7.1% in the third quarter, so the downward trend is very noticeable in the industry.

There are a few drivers from the decline in oil and gas industry health to general malaise in the economy. Backing up that point is Harley-Davidson's uptick in 30-day delinquencies and annualized losses on loans over the past two years. Customers who were excited to buy a motorcycle coming out of the recession have already purchased their toys and aren't coming back for more.

The massive difference between Polaris and Harley-Davidson

Operationally, you could make an argument for the future of Polaris or Harley-Davidson long term. Polaris has diversity and potential growth in off-road vehicles and new markets like Slingshot, while Harley-Davidson has the steady support of its consumers to fall back on. Where these companies are extremely different is on the balance sheet.

You can see below that Harley-Davidson has a debt load of nearly $7 billion while Polaris has less than $420 million in debt. This debt leverages the business, and when unseen events like a recall or recession pop up, it's the balance sheet that companies can fall back on. 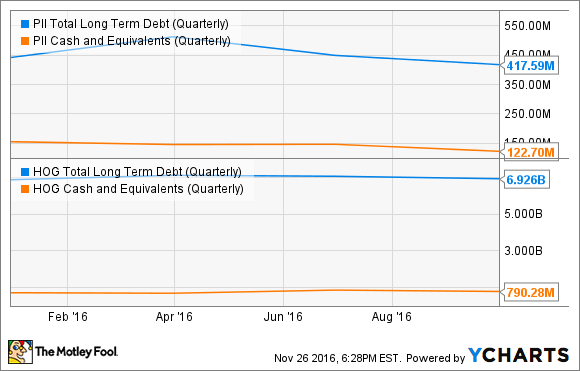 This is the biggest think Polaris has working in its favor and given the sheer scale of Harley-Davidsons' debt, it's a big advantage.

The winner in motorsports today

I think Polaris is still the better buy between these two stocks today, despite the operational challenges I pointed out above. Long term, I think the diversity of Polaris' business will be a strength and so will the better balance sheet. There could be some ups and downs in the coming year as operations get back to normal, but investors betting on motorsports long term should bet on the future of Polaris.