It's tough to predict which companies will fare well under a President Trump and which ones will fare badly. After all, the guy's not in the Oval Office and hasn't even picked a lot of his Cabinet members yet! But based on his promises and proposals during the campaign, there are some hints as to what industries might pay off for investors on Trump's watch -- and specialty truckmaker Oshkosh Corporation (NYSE:OSK) shows signs of potentially being in the sweet spot for investors.

Here 's why Oshkosh could be the ultimate company to own while Trump is in the White House. There's a truck for that

Trump has called for large increases in infrastructure spending to "transform America's crumbling infrastructure." In fact, he's even put a price tag on his plan: $1 trillion in spending over the next decade.

But although the common shorthand for infrastructure spending is "roads and bridges," Trump's plans, as detailed on his campaign website, go even further. He proposes "investments in transportation, clean water, a modern and reliable electricity grid, telecommunications, security infrastructure, and other pressing domestic infrastructure needs." In another statement, Trump also listed mass transit and high-speed rail among his infrastructure priorities. He's also lamented that American airports are "like [those] from a third-world country."

No matter which of these particular proposals are included in an eventual infrastructure package, Oshkosh probably has a specialty truck available for the job. It services the general construction industry with vehicles like telehandlers (think forklifts on steroids) and concrete mixers, sales of which would benefit from all forms of construction. Sales of the company's aerial work platforms would benefit from improvements to the telecommunications and electricity grids. And the company would even benefit from spending on airports and security infrastructure through its fire and emergency division, which sells -- among other things -- airport fire control vehicles and homeland security apparatus.

Trump has made no secret of his plans to increase the size of the military. In a speech at the private club Union League of Philadelphia, he lambasted Congress and the Obama administration for cutting 10% of the defense budget through sequestration. On his website, he pledges to "[w]ork with Congress to fully repeal the defense sequester and submit a new budget to rebuild our depleted military."

That's good news for any defense contractor, but even better for Oshkosh is the fact that Trump wants to raise the number of active duty soldiers in the U.S. Army to 540,000, or an increase of about 60,000 troops. According to Trump and Gen. Mark Milley, the Army's chief of staff, such an increase is needed to meet current threats. Trump also wants to grow the U.S. Marine Corps to 36 battalions.

Some of Oshkosh's defense division's best-selling products are personnel transporters, and all of the manufacturer's offerings are designed -- naturally -- to support ground operations. So the more troops in the U.S. Army, the more need there will be for Oshkosh products like the mine-resistant ambush protected all-terrain vehicle or the joint light tactical vehicle the company is currently developing.

Security in more ways than one

But what if Trump's plans don't come to fruition? Senate Majority Leader Mitch McConnell has stated that an infrastructure spending bill wouldn't be a high priority for the Senate. Budget hawks in Congress could scuttle Trump's proposals to increase military spending. Other issues could come to the forefront that demand time and energy, putting these proposals on the back burner.

The good news for Oshkosh investors is that the company had a strong outlook for 2017 even before Trump's election. And while the stock has jumped since Nov. 8, the company had just reported a strong fourth quarter, and management was already projecting increased net sales and earnings for 2017.

Over the past five years, the stock has outperformed standard truckmakers like Paccar, construction equipment manufacturers like Caterpillar, and even defense contractors like General Dynamics. It's done so again since the election. But don't be fooled by what looks like an unreasonable jump in Oshkosh's price. The lower chart shows the companies' performance in November: 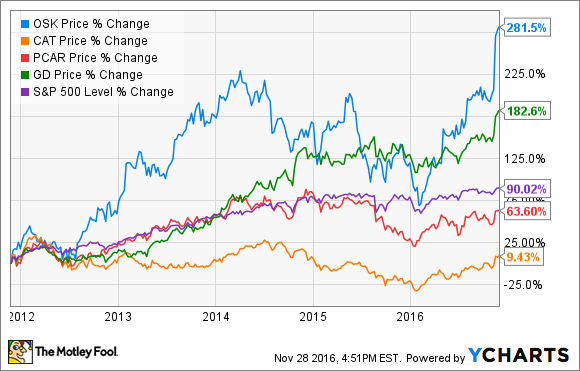 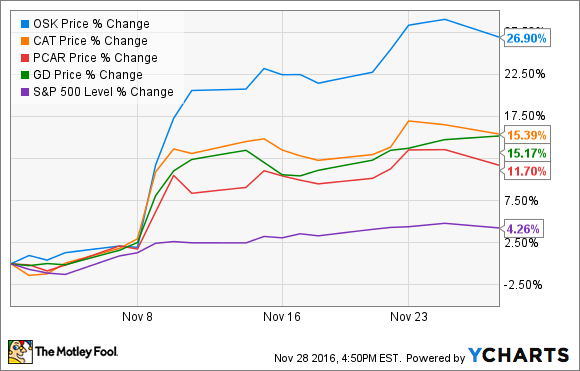 Still a big jump, but not an unreasonable one, given the company's excellent prospects under a Trump administration. The company also pays a dividend, currently yielding 1.22% after the stock's big surge.

Oshkosh seems to be the perfect company to capitalize on Trump's election. But a perfect company isn't always a perfect investment. Clearly, the market has already caught on to Oshkosh's prospects and has bid the stock price up more than its peers; which makes sense, given that Oshkosh stands to benefit handsomely from infrastructure spending and defense spending.

So investors should be cautious here. If Trump's infrastructure or defense plans don't pan out because of congressional resistance or some other factor, the stock price is likely to fall in the short term. A thesis for buying Oshkosh at this price -- currently more than 23 times earnings -- assumes that Trump's ambitious agenda will play out.

Looking beyond the upcoming administration -- which any long term investor should be doing-- there is still reason to believe Oshkosh is a good investment. Even if increased infrastructure and defense spending doesn't materialize on Trump's watch in the next four or eight years, Oshkosh is still a strong company with a bright future. Investors who buy in now should be prepared for potential short-term setbacks in the event that the Trump administration thesis doesn't pan out, but the company does look to be on the road to long-term success.