Travis Hoium and Rich Smith
(TMFFlushDraw)
Author Bio
Travis Hoium has been writing for fool.com since July 2010 and covers the solar industry, renewable energy, and gaming stocks among other things. Follow @TravisHoium

Shares of Diana Shipping Inc. (NYSE:DSX) and many of its dry bulk competitors have surged in recent weeks on speculation that Donald Trump's election will lead to an increase in demand for commodities, like steel, in the U.S. 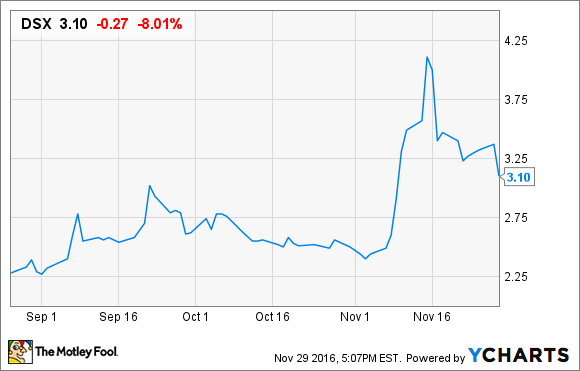 To bolster the thesis, the dry bulk index, which approximates the dayrates dry bulk shippers are getting for ships, has been on the rise since a February low near 290 to over 1,200 today. But as with any surging stock, there are two sides to Diana Shipping's investment thesis today. And fellow Fools Travis Hoium and Rich Smith are taking opposite sides of the argument.

A look at the downside for Diana Shipping

Travis Hoium: The bear investment thesis is pretty easy to lay out for dry bulk shippers. A recent rise in stocks has been driven by speculation, but the fundamentals of Diana Shipping and others in the dry bulk shipping industry are incredibly weak.

In the first nine months of the year, Diana Shipping lost $145.3 million, or $1.81 per share, on revenue of just $86.2 million. The time charter equivalent rate of $6,033 is barely enough to cover vessel operating expenses of $5,288 per day, and definitely isn't enough to offset depreciation, or pay for debt.

Speaking of debt, long-term debt of $609.0 million with interest expense of $16.3 million in the first nine months of the year is what the company has to cover just to stay afloat. And overall operations, excluding depreciation and amortization, still resulted in a loss of $11.1 million.

Diana Shipping isn't making enough money to pay for debt, much less cover the cost of ships it's already acquired. And with the increase in the dry bulk index and shipping stocks built on speculation, not fundamentals, this is a rally I'm going to steer clear of.

But the upside is so much bigger!

Rich Smith: I agree 100% with Travis -- that Diana Shipping Inc is a hugely risky investment. In fact, I think another of our Foolish colleagues, Tyler Crowe, put it especially well earlier this month: "Dry bulk shipping stocks has been a place for investor money to go and die."

And yet, I have to say that Diana Shipping stock has me intrigued.

On the one hand, yes, Diana is losing money and buried in debt. On the other hand, that's largely because it hasn't been able to charge enough for its services to cover its costs for a long time now. But this may be beginning to change.

The Wall Street Journal confirmed last week that charter rates for dry bulk ships have finally risen enough that dry bulk shippers can, once again, earn a profit. The Journal noted that, if it costs $8,000 a day to break even on the costs of operating a Kamsarmax transport, for example, then shippers today can charge between $9,000 and $11,000 a day to charter such a vessel. Exact rates will vary from vessel to vessel, and only four of Diana's vessels are Kamsarmax class, but the overall theme seems to be that rates have reached a point where profits can, once again, be earned -- and rates are trending higher.

In fact, over the course of the past nine months, the rates that dry bulk shippers have been able to charge for their services have roughly quadrupled. The Baltic Dry Index (BDI), which tracks such rates, read 295 "points" back in mid-February. As of Tuesday, though, the BDI had risen to 1,184.

If you figure that dry bulk shipping stocks should probably roughly track the BDI's performance -- as many investors do figure -- then you'd expect to see a similar 400% rise in the value of Diana Shipping shares. Instead, S&P Global Market Intelligence data shows that Diana Shipping stock is up only 30% over the same period. That alone suggests there's a lot more room for Diana stock to run, just to catch up to gains on the BDI.

In short, are there risks here? Sure. But there's also a lot of opportunity.

Why You Should (and Shouldn't) Buy Diana Shipping Inc. @themotleyfool #stocks $DSX Next Article
Current