Nike (NYSE:NKE) stock seems to have lost some of its game in the last year, falling around 25% since November 2015. After announcing ambitious plans in October 2015 to increase sales 63% over fiscal year 2015 to $50 billion by fiscal year 2020, growth started to come into question. Foreign currency headwinds and competition from other sports apparel companies have been blamed for slowing sales growth.

Nike sales did speed up in the most recent quarter, rising 8% year over year, ahead of the 6% posted for full fiscal year 2016. However, the company's margins are in decline, a potential hazard for how much Nike can grow earnings in the future. Nike management is confident it can turn this margin decrease around and spur faster earnings going forward.

Why margins have slipped

Nike's gross margin dropped 200 basis points to 45.5% during Q1. The main reason for this drop seems to have been inventory issues. Higher-than-needed inventory led to product price discounts for quicker sale, and the lower selling prices hurt gross margin. 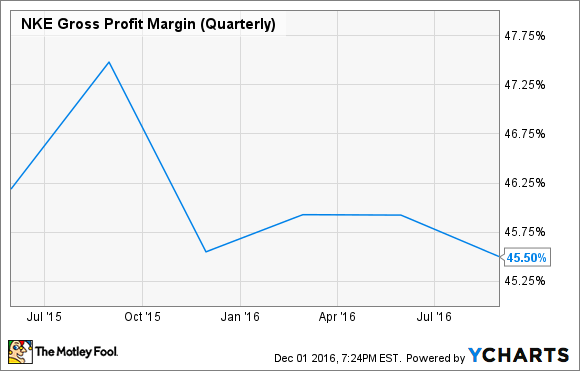 As for profit margin, the Rio Summer Olympics and increased marketing expenses internationally raised selling costs, while initiatives such as Nike's manufacturing revolution and a new flagship tech-infused store in New York were investments that also raised costs and subsequently hurt earnings. Fortunately, with a one-time tax benefit carried over from previous cycles, Nike was able to pay just 2.5% in taxes for Q1, which helped profit margin  and allowed the company to post EPS of $0.73, a 9% rise year over year.

Long term, Nike will need to increase margins to continue growing profitability. Here are three ways management seeks to do that.

Better inventory management: As inventory rises, the company becomes bloated with goods that it needs to sell quickly, sometimes for a discount. Nike's inventory is still rising, but while inventory value rose 11% year over year in Q1, wholesale volume inventory rose only 3%. Value rising above volume is a good sign that higher priced goods are being circulated into the mix, such as higher end footwear, and also means that the company's inventory channels are likely getting leaner.

"We also made great progress against clearing excess inventory within the quarter and we're seeing the benefit of bringing new product into the clean, full price in-line channels," said Nike's brand president, Trevor Edwards, in the recent Q1 earnings call. "Looking forward, we will continue to manage the flow of product into the market as we expand on an already healthy in-line marketplace." Toward the second half of this fiscal year, management expect gross margins to return to normal worldwide.

Increased focus on Nike.com: Nike's e-commerce sales are a bright spot of its earnings, rising 49% year over year during fiscal Q1. Direct-to-consumer (DTC) sales are likely to be a major driver of higher margins, particularly through Nike.com but also through Nike's owned stores. For sales made through third-party retailers, those distributors get a cut of the total sale price, which comes out of Nike's pocket.

Nike has multiple ways it's increasing its digital focus, including new and improved mobile apps that not only help users track workouts, but also have a focus on mobile shopping. Nike has also launched 20 additional country-specific websites around the world recently, doubling the total of such sites to 40. Finally, Nike is also using its physical stores to push more interaction with online shopping. Nike opened a new concept location in New York in November that, along with an indoor basketball court with real-time digital coaching and other high-tech features, also has Nike+ app integration so users can save their favorite styles to buy later after playing in the store.

Manufacturing Revolution: More long term, Nike hopes overhauling its manufacturing will lead to more profitability by allowing new technology to bring manufacturing to the digital age. CEO Mark Parker mentioned the company's manufacturing revolution in the Q1 earnings call. Someday in the not-too-distant future, 3D printing and other technology could help bring product to the consumer faster and cheaper. This could even theoretically mean in-store manufacturing, where a consumer could get part or all of their product made to order in person, eliminating many of the logistics issues around manufacturing, shipping, and inventory storage.

Better inventory management is likely to help gross margin turn back around by the end of this fiscal year, while increased investment on DTC sales such as through Nike.com are already showing signs of paying off. Big investments like overhauling manufacturing will take longer to go from the costs they represent now to the profit generators they could be in the future, but they look like reasons to believe Nike is taking the right steps to plan for long-term earnings growth. Now that the stock has been hammered this year because of concerns about short-term growth prospects, partially because of lowered margins, Nike stock looks like a great value ahead of its margin rebound.