Ford Motor Company (NYSE:F) said that its sales in China grew 17% in November, keeping the Blue Oval on pace for a record year in the world's largest new-car market.

All numbers shown in the chart are retail sales, not wholesale shipments to dealers. Sales of Lincoln-brand vehicles are reported quarterly and are not included in this chart.

What's working (and isn't) for Ford in China right now

Ford continues to do well in two of the sweet spots of the Chinese new-vehicle market: car-based "crossover" SUVs and small sedans. Ford's traditional strength in commercial vehicles has also helped it find growth in China, as seen in JMC's overall result.

Ford's SUV lineup in China is led by the Edge, which is built locally (by CAF) in standard five-passenger form as well as in a unique-to-China longer-wheelbase version that seats seven. Sales of the Edge were up 21% in November.  Ford is also seeing increasing sales of the larger Explorer, which is imported into China in small numbers.

A revamped version of the Kuga (twin to the U.S.-market Escape) is rolling out to Chinese Ford dealers now, and should help results in another month or two. 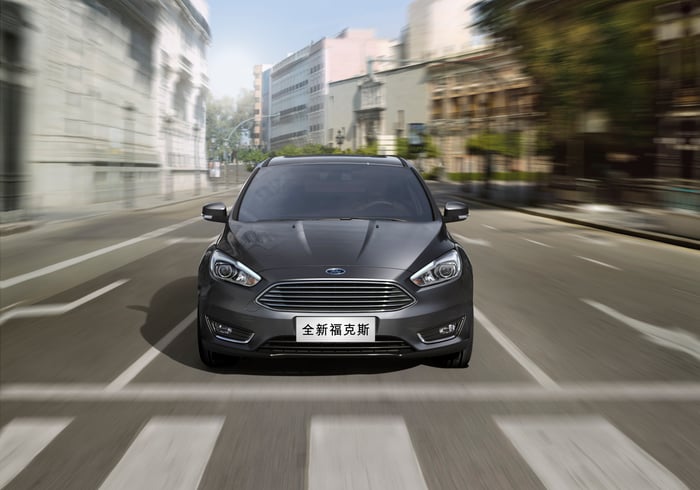 The Ford Focus is positioned as a premium offering in China, ahead of a more affordable China-only model called the Escort. Sales of both have been brisk. Image source: Ford Motor Company.

Ford's small sedan lineup in China includes the familiar Focus as well as a more affordable China-only model called the Escort. Both are made locally by CAF, and sales of both have been strong: Focus sales rose 28% in November, while sales of the Escort jumped 50%.

Analysis: Ford is setting up a good fourth-quarter result in China

November made five months in a row of strong year-over-year growth for Ford in China, following a difficult stretch earlier in 2016. Ford's team in China had been surprised by aggressively priced competition from local Chinese automakers, resulting in lost market share. But pricing adjustments (accompanied by cost cuts) and strategic shifts helped Ford begin to recover by midyear.

The result was a good third quarter. Ford's equity income from its two Chinese joint ventures totaled $320 million, up 26% from the third quarter of 2015.

CEO Mark Fields said in October that he expected that momentum to continue through the fourth quarter. Two-thirds of the way through, it looks like his expectations weren't misplaced.