Oshkosh's fire and emergency segment is a bright spot in its portfolio. Image source: Getty Images.

Shares of Oshkosh Corporation (NYSE:OSK) rose 28.4% in November, after the specialty-truck maker put out a stellar Q4 earnings report on the first of the month, and then rode the tailwinds of Donald Trump's election victory to even higher levels.

Oshkosh grew sales and earnings in its fourth quarter and posted impressive free cash flow for the fiscal year. Its adjusted earnings of $1.05 per share trounced analysts' estimates of $0.84, and all four of the company's divisions posted year-over-year net sales increases. That fueled a modest jump in the stock price.

But it was Oshkosh's defense division that benefited the company most of all this month. A Trump victory is seen as a boon for defense companies, and the federal government is Oshkosh's biggest customer, responsible for 15% of its revenue. That's why the stock's biggest rise came in the days following the election: 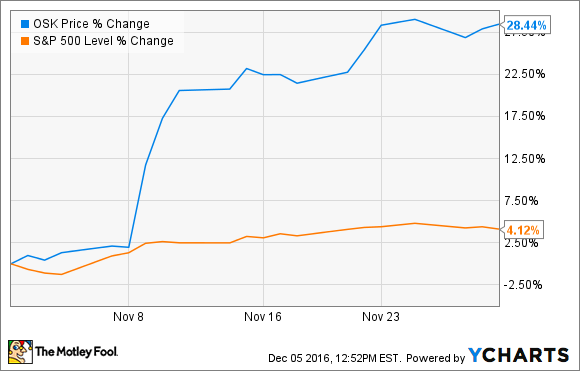 Oshkosh could be sitting in a sweet spot in 2017 under a Trump administration. The company has already begun shipping its new Joint Light Tactical Vehicle to the U.S. Department of Defense as part of an eight-year contract to supply the U.S. Army and Marines. But because Trump wants to raise the number of active-duty soldiers in the U.S. Army to 540,000, or an increase of about 60,000 troops, there may be even more need for Oshkosh's vehicles, many of which support ground operations.

And while weak construction markets were projected to continue into 2017 -- which would have put a damper on sales in the company's largest access equipment segment -- the possibility of a bipartisan infrastructure spending bill, championed by Trump, could lead to a faster-than-expected recovery in that sector. Either way, management believes that the company's existing defense business and fire and emergency segments will more than offset any potential weakness, leading to a solid outlook for the whole company for fiscal 2017.

But even if increased infrastructure and defense spending doesn't materialize in the next four or eight years -- which could cause a short-term stock drop -- Oshkosh is still a strong company with a bright future.