Please ensure Javascript is enabled for purposes of website accessibility
Log In Help Join The Motley Fool
Free Article Join Over 1 Million Premium Members And Get More In-Depth Stock Guidance and Research
By John Maxfield - Dec 14, 2016 at 8:44AM

Bank investors will be waiting with bated breath for the Federal Reserve’s monetary policy announcement.

The headquarters of the Federal Reserve in Washington, D.C. Image source: iStock/Thinkstock.

Make no mistake about it: Wednesday is an important day for bank stocks such as Bank of America (BAC 1.09%) and JPMorgan Chase (JPM 1.66%). It's on Wednesday that the Federal Reserve concludes the latest meeting of the Federal Open Market Committee, or FOMC, which is responsible for setting monetary policy.

It's at this meeting that a rotating group of Fed governors will determine whether to increase short-term interest rates before 2016 comes to a close. It would be the only time that the central bank raised rates this year, and just the second time it will have done so since the financial crisis eight years ago.

The first time the Fed did so after the crisis was last December, when it hiked the Fed Funds rate, the principal short-term interest rate benchmark in the United States, by 25 basis points, or 0.25 percentage points. 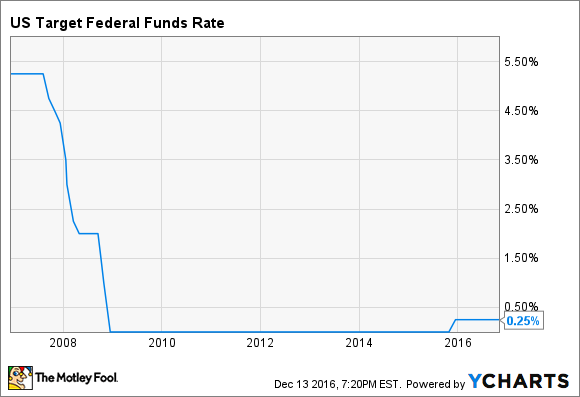 The central bank's reluctance to do so this year flew in the face of forecasts, as analysts and commentators had been predicting essentially all year that it would pull the trigger on a rate hike. The one exception was in the immediate wake of the United Kingdom's vote to separate from the European Union, known as Brexit, which ratcheted up uncertainty in global financial markets.

You can take this for what it's worth, then, but the Fed is almost universally expected to announce after its meeting concludes on Wednesday that it will indeed raise rates. According to CME Group's analysis of 30-day Fed Fund futures prices, which gauges the market's view on changes in U.S. monetary policy, there's a 95% probability that the Fed will boost rates from their current target range of 25-50 basis points up to a range of 50-75 basis points.

This alone isn't a game changer for Bank of America, JPMorgan Chase, and other banks, as a quarter-point increase in rates is just a drop in the bucket when you consider that short-term rates continue to hover in the vicinity of 0%. However, it will send a strong signal to the market about the Fed's confidence in the direction of the economy.

When Fed Chairwoman Yellen testified before Congress last month, she noted that the economy had continued to "make progress this year toward the Federal Reserve's dual-mandate objectives of maximum employment and price stability." She then went on to say that the FOMC had "judged that the case for an increase in the target range had continued to strengthen and that such an increase could well become appropriate relatively soon if incoming data provide some further evidence of continued progress toward the Committee's objectives."

That evidence has since been provided. Data released at the end of November showed that nationwide housing prices have ascended to a new all-time high for the first time in nearly a decade. And more importantly, the Labor Department announced at the beginning of this month that the unemployment rate had unexpectedly dropped to 4.6% in November, down from an already low 4.9% the previous month. It's now well below the Fed's 5% target rate. The last time the unemployment rate was this low was August 2007. Higher interest rates are almost invariably good for banks. Bank of America says that a 100-basis-point increase in short- and long-term rates would translate into an additional $5.3 billion worth of net interest income. The same increase at JPMorgan Chase is estimated to be $2.8 billion. Divide these figures by four and that's roughly the size of the boost these banks would see from the Fed's decision to raise rates by 25 basis points (this assumes a parallel shift in long-term rates).

You shouldn't interpret this to mean that shares of Bank of America or JPMorgan Chase, or any bank for that matter, will necessarily surge if the Fed follows through on a rate hike. They may, but they may not. After all, stocks throughout the industry are already riding high in the wake of the presidential election. The more important effect would come about if there were a disappointment on this note, which could serve to moderate investors' otherwise high expectations for the sector.

John Maxfield owns shares of Bank of America. The Motley Fool has no position in any of the stocks mentioned. Try any of our Foolish newsletter services free for 30 days. We Fools may not all hold the same opinions, but we all believe that considering a diverse range of insights makes us better investors. The Motley Fool has a disclosure policy.