NVIDIA (NASDAQ:NVDA) has made some impressive moves in 2016 that have won the company a lot of analyst attention and upgrades -- and rightfully so. The company's ability to challenge industry giants to grow in many of the most exciting and potentially high-growth sectors in the tech market could lead to much more growth in the future. Here are three ways NVIDIA stock could continue rising.

NVIDIA has its hands in a lot of segments, but it still gets most of its revenue from GPUs (graphic processing units). NVIDIA announced this year that it will be the chip provider for Microsoft's (NASDAQ:MSFT) new Surface Studio. This high-end and high-power computer is undoubtedly going to be one of the industry news-makers when it's available broadly starting in early 2017.

Another exciting partnership announcement this year for NVIDIA was that Tesla (NASDAQ:TSLA) said in late October that it had ended its relationship with Mobileye, and would be switching to NVIDIA's technology instead. NVIDIA's automated driving technology is quickly becoming one of the industry standards, and NVIDIA has now signed deals with various car companies to get its infotainment and driverless technology in new generations of connected cars. More big partnerships like these in 2017 are likely to also send the stock higher.

Other than autonomous cars, virtual reality (VR) has been a hot topic in the tech industry in 2016. Its potential uses in personal media, video games, and even video conferencing for business meetings has led analysts at Digi-Capital to predict that the industry could be worth $120 billion by 2020.

That would be great news for NVIDIA, which is already one of the most important names in the space for providing high-power graphics chips for computers, and especially laptops, to make them VR-ready. Earlier this year, only a small fraction of laptops had VR capabilities, but NVIDIA is quickly changing that by rolling out graphics processors for laptops that are closing the gap with desktops -- a good sign for gaming and VR adoption. To speed things up, NVIDIA recently started offering a bundle of free VR games when users buy NVIDIA graphics hardware. Getting some good numbers on how much this VR trend is adopted in 2017 should provide analysts reason to upgrade this portion of NVIDIA's business.

In NVIDIA's most recent quarter, the company posted earnings per share of $0.83, far ahead of analyst expectations, that sent the stock surging. This is nothing new for this high-performing company that consistently beats on earnings and gets a share price bump each time. 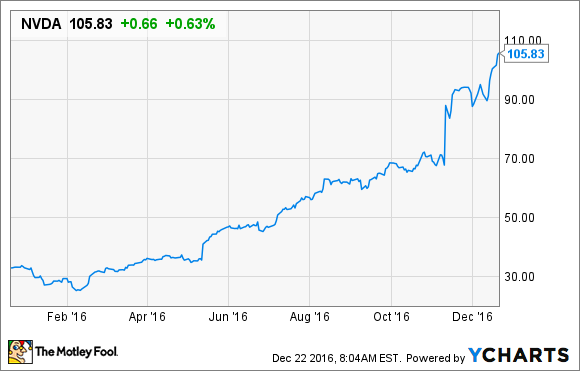 It will get harder and harder for the company to keep making these kinds of earnings beats since analysts will start to consider so much growth the norm for NVIDIA and begin increasing their forecasts for the next quarter. Already, Q4 estimates are high, but if history is any indication, NVIDIA could very well beat those again, which would likely send the stock higher.

NVIDIA has had an incredible 2016, both in terms of smart moves made by the company, and also by share price growth, which is up 220% so far in 2016. NVIDIA stock now trades at 67 times earnings, and it has quickly become one of the most expensive companies in its sector. As we've seen time and time again, that could mean a slight pullback in the year ahead at the first sign of growth slowing as the company matures.

Still, if you want to buy in but are waiting for a pullback, consider that shares are trading at just 39 times next year's earnings estimates because of how quickly earnings are expected to keep growing, meaning if the company performs on the bottom line throughout 2017, it could gain substantially before any pullback. Therefore, it's probably better to take the long approach with this company and invest for where it might grow to in the next five or 10 years.