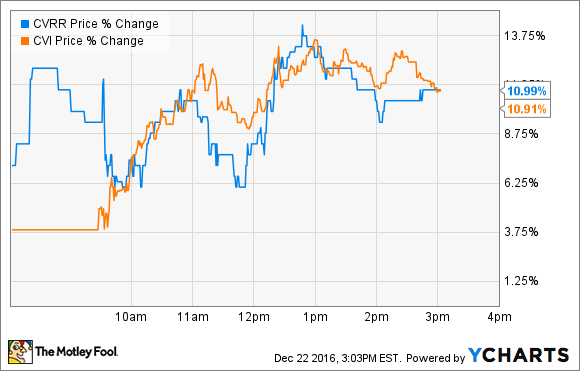 Fueling the bounce was an announcement that President-elect Donald Trump had tapped CVR Energy's controlling shareholder, Carl Icahn, to be his special advisor on regulation.

Icahn's role will be to help overhaul federal regulations that are hindering business, including EPA regulations that are costly for merchant refiners like CVR Refining to comply with. Further, because Icahn will serve in an "individual capacity" rather than as a government employee, he will not have to divest his controlling position in CVR Energy. In other words, he stands to benefit financially should the regulatory reductions he proposes lead to an increase in the value of CVR Energy's stock.

Icahn's primary target will likely be the EPA's Renewable Fuel Standards (RFS) program, which he and CVR Refining CEO Jack Lipinski have criticized. Lipinski called the program "broken" due to the "exorbitant costs of Renewable Identification Numbers (RINs)" that must be purchased by merchant refiners like CVR Refining. However, with Icahn-approved Scott Pruitt set to take over the EPA, these and other environmental regulations could soon be a thing of the past. That would allow merchant refiners to compete better against larger integrated refiners, which haven't been hurt by the skyrocketing costs of RINs because they control the blending and retail sale of their fuel.

With Icahn heading to Washington to offer his opinions on how best to ease the burden of regulation on business, it appears more likely that the Trump administration will move quickly on that from. That unshackling could enable merchant refiners specifically to thrive in the years ahead, enabling their investors to capture that upside.