The Swedish automaker, now under Chinese ownership, has been on an upswing amid signs that it's planning to go public soon.

Swedish automaker Volvo Cars said this week that it has raised 5 billion Swedish kronor ($532 million) from the sale of "preference shares" to a group of Swedish institutional investors, a move the company said was a step toward an initial public offering.

This confuses many investors, so let me explain.

Volvo AB (NASDAQOTH: VOLVY) is a public company, a major manufacturer of trucks, buses, construction equipment, and big engines for marine and industrial applications. It used to make cars, too -- but it sold its car-making unit to Ford Motor Company ( F 0.42% ) in 1999. 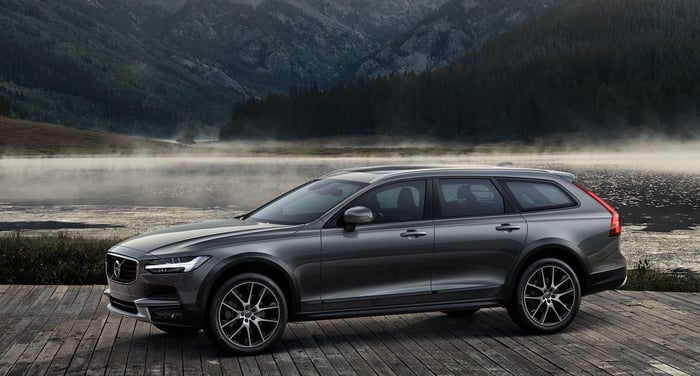 New models like the V90 Cross Country have Volvo Cars on an upswing amid signs the Swedish automaker is preparing for an IPO. Image source: Volvo Cars.

Okay, so what is this fundraising deal about?

Volvo Cars said it sold newly issued "preference shares" to three Swedish institutional investors, two pension funds, and an insurance company. It said these shares may either be repurchased by the company or converted into "listed ordinary shares" (e.g., publicly traded common stock) at the discretion of "the majority shareholder" in the company.

The share sale followed two bond issues earlier in 2016, all intended to diversify Volvo Cars' long-term funding sources -- but it's the first issue of equity shares since Geely bought the company.

Why do we think this has anything to do with Volvo Cars going public?

The company said it does. Here's what Volvo Cars said in the press release announcing the sale of the preference stock: "Today's move is another step toward Volvo Cars' long expressed ambition to act as a listed company."

It's no secret that CEO Hakan Samuelson has wanted to take Volvo Cars public for a while. The company has begun releasing quarterly financial results as if it were public. Officially, Geely has said there are "no plans" for a Volvo Cars IPO, but the stock issue indicates that things are moving in that direction.

How is Volvo Cars doing?

There's room for improvement, but the company is on a clear upswing thanks to some strong new models, particularly the new top-of-the-line 90 Series range. Sales are up, and margins are improving.

Here's how its third-quarter numbers compared with year-ago results.

Its operating profit margin of 5% (6.1% through the first three quarters of 2016) is low compared with its German luxury-car rivals, all of which target operating margins in the 8% to 10% range. But it's substantially improved from the year-ago period, and the company is on track for its best full-year operating margin since it was acquired by Geely.

Should investors keep an eye on this?

I think so. I think it's fair to say Volvo Cars has performed better over the last couple of years than most analysts would have expected. There's still room for improvement around margins, but overall, the company is in a fairly strong position.

Volvo Cars' current product line is well-regarded by critics, its brand is still very strong, and its partnerships with Uber Technologies and Autoliv ( ALV 1.16% ) around self-driving technologies will help it stay in step with its German rivals and new high-tech industry entrants.

Long story short: A Volvo Cars IPO could be an interesting opportunity for investors eyeing the intersection of technology and autos.