Most big bank stocks had a stellar year in 2016, with the average blue-chip bank stock up 27% last year. But not ever bank stock ended the year higher. New York Community Bancorp (NYSE:NYCB) fell around 3%, qualifying it as the worst-performing big bank stock in 2016.

There's nothing wrong with New York Community Bancorp. It's still the same safe and profitable bank it's always been. But there was one issue that weighed on its stock over the past year.

The issue surrounded its proposed merger with Astoria Financial (NYSE:AF), a $14.8 billion bank based in New York. New York Community Bancorp had been making noise for two years about a transformative merger that would catapult its balance sheet well beyond the $50 billion threshold that qualifies banks for stricter regulatory oversight.

"We are truly excited to be announcing this merger with our neighbor and friendly competitor, Astoria Financial, the parent of 127-year old Astoria Bank," said New York Community Bancorp CEO Joseph Ficalora at the time. "We've been prepping for a large merger since the end of 2011 and, now that all the stars have aligned, I have to say: It certainly looks and feels right."

But an important catch to the deal was that it all but required New York Community Bancorp to cut its once-resplendent quarterly dividend, which it hadn't done in more than a decade. This was a consequence of becoming a systemically important bank by crossing the $50 billion asset threshold, above which the Federal Reserve exercises veto power over bank dividend policies.

It was thus no coincidence that New York Community Bancorp slashed its dividend by a third on the same day that it announced its merger with Astoria Financial. As Ficalora noted:

Based upon an anticipated dividend payout ratio of 50% upon completion of the merger, we have decided, going forward, to reallocate $0.08 cents per share from our traditional dividend payment to support our future growth and capital strength. Accordingly, our expected dividend will be $0.17 per share, subject to regulatory approval, beginning in the first quarter of 2016.

Cutting its dividend to finance growth and buoy its capital doesn't seem like something that should raise alarm bells among investors. But New York Community Bancorp is unique, as it's long been a favorite among dividend investors for both the size and the consistency of its quarterly payout. 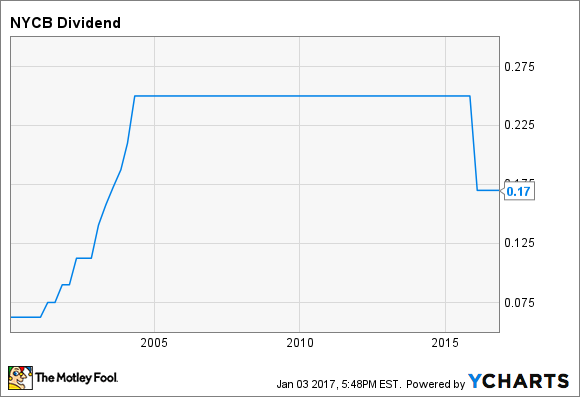 Prior to the cut, the bank distributed 90% or more of its earnings to shareholders each year. By reducing that to only 50%, which is still high compared to other large banks, New York Community Bancorp thereby materially changed the investment characteristics of its stock.

Moreover, following a year in which its stock headed lower in response to the merger, but just as investors seemed to be coming to terms with it, the deal was abruptly called off in December after regulators made it clear that the deal wouldn't close by the end of the year, as stipulated by the terms of the merger agreement. The sudden and unexpected reversal extinguished the gains that New York Community Bancorp's stock had eked out in the wake of the presidential election.