Some investors hold dozens of stocks at any given time, using diversification as a way to minimize the chance that a single mistake causes an outsize amount of pain. There's nothing wrong with that approach, but it tends to dilute one's best ideas with so-so stocks. As Warren Buffett says, "Diversification is protection against ignorance." If you're not confident in your best ideas, diversify away.

I take the opposite approach. "The way to become rich is to put all your eggs in one basket and then watch that basket," according to Andrew Carnegie. That's what Buffett has done his entire career, betting big when the odds were heavily in his favor and doing nothing when they weren't.

The top three holdings in my portfolio, International Business Machines (NYSE:IBM), Cisco Systems (NASDAQ:CSCO), and Kulicke & Soffa Industries (NASDAQ:KLIC), account for a little less than 40% of its total value. I bought each at a price that gave me a substantial margin of safety, giving me plenty of room to be wrong. My favorite kind of investment is one where I have to be right about very few things for it to work out well.

IBM is my biggest position. The stock has been on a roller-coaster ride since I first bought shares in late 2014, dropping considerably in 2015 and then recovering in 2016. I bought shares a total of eight times as the stock fell, lowering my cost basis to about $154 per share by the end. A 20% gain in 2016 brought the position back into the black. 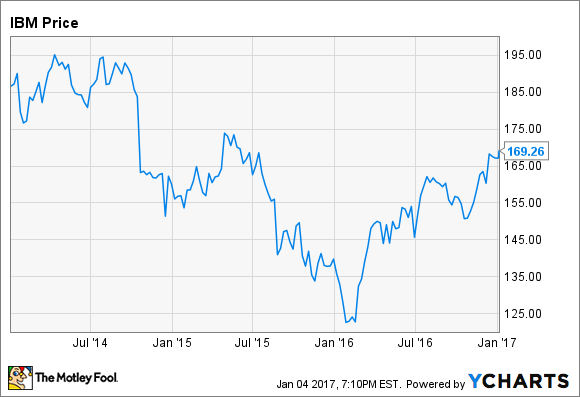 In the case of IBM, a slumping stock price didn't change my thesis. The market had become extremely pessimistic about IBM's ability to adapt to a world where cloud computing was growing in importance. Revenue and profit were slumping as IBM sold off underperforming businesses and shifted its focus to its growth businesses. Currency didn't help, with a strengthening U.S. dollar in 2015 wreaking havoc on the company's international numbers.

IBM has the benefit of a broad base of global customers that rely on its hardware, software, and services. This doesn't guarantee that the company will remain relevant forever, but it does give it time to make the necessary changes. IBM's cloud business is now booming, bringing in $12.7 billion of revenue over the past 12 months. Total software revenue is growing again, and cognitive computing system Watson will be used, both directly and indirectly, by more than 1 billion consumers by the end of 2017.

IBM expects to produce at least $13.50 in adjusted earnings per share in 2016, which is depressed because of its heavy investments and the continued negative impact of currency. IBM will need to eventually return to earnings growth for my investment to reach its full potential, but I'm confident that the company's strategy is the right one.

I've owned shares of networking hardware giant Cisco since mid-2012, originally paying $16.61 per share. I added to that position a couple of times, including in early 2016, when the stock market had a brief but lucrative meltdown. My cost basis currently sits at $20.40 per share.

The stock has surged to around $30 per share since then, driven mostly by the fact that the market was extremely pessimistic about Cisco a few years ago. The company's results have been fine but nothing to write home about. Growth has been slow, and its core switching and routing businesses have been volatile. But Cisco continues to dominate those markets. 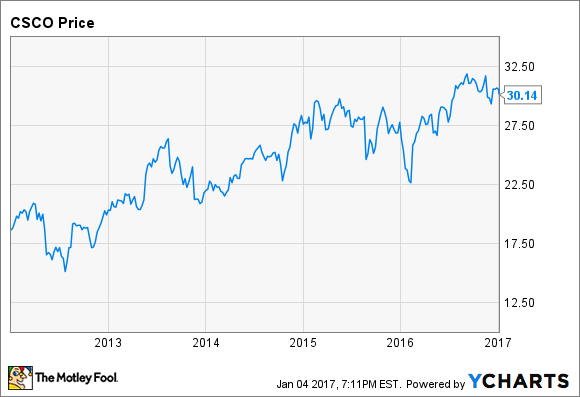 Cisco is extremely profitable, producing operating margins around 25%. The company has produced $12.4 billion of free cash flow over the past 12 months, compared with a market capitalization of about $150 billion. Back out the $36 billion of net cash on the balance sheet, and Cisco's cash-adjusted price to free cash flow ratio is a paltry 9.2.

The rise of cloud computing and software-defined networking has introduced quite a bit of uncertainty. Whether Cisco can remain as dominant as it is today in its core markets going forward is an open question. But the pessimistic stock price gives investors a substantial margin of safety. Cisco doesn't need to be the growth company it once was for an investment in the stock to work out well. It just needs to do better than the market expects. And the market isn't expecting much.

Kulicke & Soffa is not a well-known company. It manufactures semiconductor packaging equipment, holding a dominant share of the market for wire bonding equipment. I first wrote about Kulicke & Soffa in July 2015, and I bought shares soon after. I bought a few more times as the stock gyrated, building up a substantial position.

Shares of Kulicke & Soffa have soared since bottoming out a little over a year ago. The stock is up about 70% from its 52-week low. I sold about one-third of my position late last year because it had become too big a part of my portfolio, but Kulicke & Soffa is still my third-largest holding. 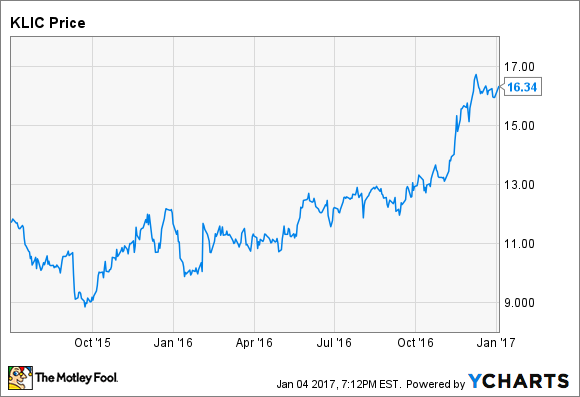 Kulicke & Soffa's revenue and profit fluctuate along with demand for its equipment, leading to major swings in both. But the company has done a good job remaining profitable during the tough times, only posting one annual net loss in the past decade. Kulicke & Soffa's balance sheet was a big factor in my decision to buy the stock in the first place. At the end of the most recent quarter, the company had $548 million in cash and no debt. Even after the surge in the stock price, cash still represents nearly half of Kulicke & Soffa's market capitalization.

Averaging around $50 million in net income annually, albeit with a lot of variation, Kulicke & Soffa was too cheap to ignore when it was trading for around $10 per share. It's not nearly as cheap today, but it's still a solid company trading at a reasonable price.