A series of negative events caused shares of Insys Therapeutics (NASDAQ:INSY) to collapse in 2016. The stock price of the biotech, which focuses on products to treat pain, fell by more than two-thirds during the year, according to data from S&P Global Market Intelligence. 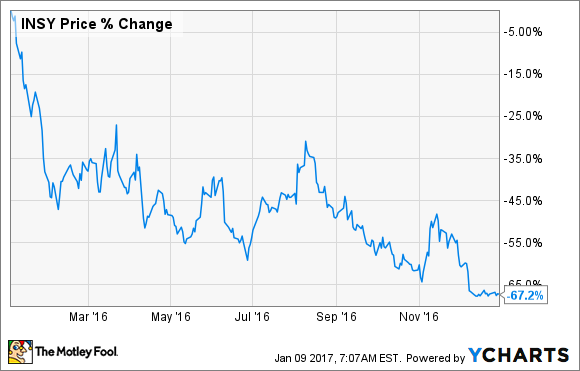 Here's an overview of the key events that moved shares during 2016.

Given the dominance of negative events, it is easy to understand why shares collapsed.

Given the growing concerns over the abuse of opioids, providers are likely to be more restrained in their use of Subsys in the future. That leaves Insys' future riding on the success of Syndros and the rest of its pipeline.

While Syndros' market opportunity exceeds nine figures annually, it is unclear if the dark clouds that surround Insys will prevent the drug from reaching its full potential. In addition, Insys' stock is likely to continue to trade erratically based on the headlines of the day. Thus, while the stock is certainly cheap, I personally think that this company is far too risky to touch.