We Americans love our guns -- and apparently, we love them twice as much as we used to.

We first twigged to this trend in 2015, when an astounding story on The Washington Post's Wonkblog site revealed that the average number of firearms owned by a "typical gun-owning household" had roughly doubled between 1994 and 2013, to 8.1 guns per household. The trend has only gone up since. 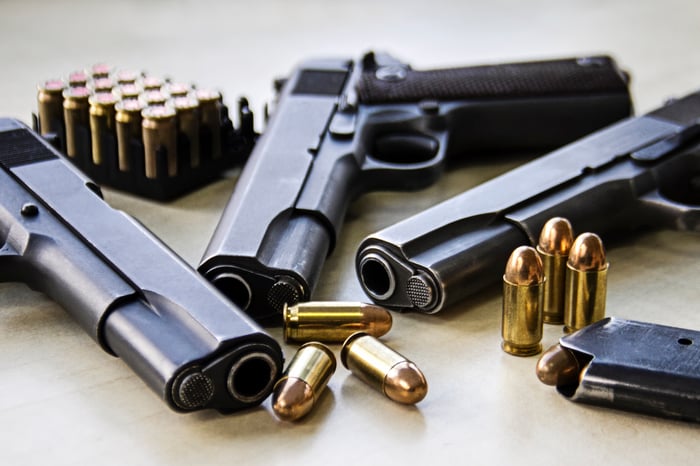 How do we know this? A recent Harvard/Northwestern University joint study estimates that America's 319 million citizens own about 265 million guns today. And although from 1994 to 2016 the number of Americans who own guns decreased from 25% to 22% -- and has in fact been declining over the past 20 years -- FBI National Instant Criminal Background Check System data show that gun sales set new records for the past 18 straight months through November.

Within this broader trend of fewer gun-owners owning more guns each, Fortune magazine has identified a trend of gun "super-owners," who love guns even more than the average gun-lover. If you do the math, roughly 2% of Americans (1 in 50) now own half of the guns (50%) in America.

As an investor, when I see data like this, it gets me wondering: What does all of this mean for gun stocks like Smith & Wesson (NASDAQ:SWBI), Sturm, Ruger (NYSE:RGR), and Vista Outdoor (NYSE:VSTO)? What does it mean for ammunition manufacturers such as Olin Corp (NYSE:OLN) and Orbital ATK (NYSE:OA) if fewer and fewer people are buying more and more guns?

There are a couple of ways to look at this data. If 2% of Americans own 50% of America's guns, then how many more guns can they afford to buy? How many more guns do they need to buy? Because if we reach a point where gun super-owners run out of money to buy more guns, or decide they have enough guns already, then that would appear to spell an end to sales growth at Smith & Wesson, Sturm, Ruger, and Vista Outdoor. Fewer gun sales would also be bad news for the sale of ammunition by Olin Corp (Winchester bullets) and Orbital ATK (Federal-brand ammunition).

So how big are these risks?

How much does a gun cost?

Luckily (for investors), I don't see either of these risks as being particularly big. Gun costs vary widely from model to model. Ruger's popular LCP concealed carry pistol, for example, can be had for less than $300, while a big Barrett 82A1 .50 caliber sniper rifle can easily set you back $10,000. But as a general rule, an ordinary handgun can usually be bought brand new for less than the cost of a television (and TVs have gotten pretty cheap), so I see little risk from an affordability standpoint. The more so because, according to data from a 2014 General Social Survey report, gun owners tend to be a pretty affluent bunch.

GSS data show that gun ownership rises sharply with income, with householders earning less than $25,000 only 18% likely to own a gun, while 44% of households earning $90,000 or more own a gun. When you consider that a $90,000-earner can buy a new handgun for less than half of one percent of annual income, money doesn't seem much of an obstacle to gun owners being able to buy more guns.

How many guns does one need?

As far as need goes, according to Fortune, the average "super-owner" owns 17 guns already. And here you have to ask yourself "why?"

Is it because the gun-owner needs 17 guns, or because he likes buying guns? Because once you've got your range pistol, your concealed carry, your shotgun for home defense, and your .22 for plinking, I rather suspect you've moved beyond "need" and started to wander into "want" territory. If gun owners simply like buying guns, then that's not something that's likely to change.

The real risk to gun sales in America

That being said, there is a risk to gun sales, and gun stocks, even among super-owners, and this is the risk that gun companies will fail to give buyers a reason to want to buy new guns.

Right now, gun companies (and some gun investors) are worried that gun sales will slow under a Donald Trump presidency. If this fear begins to translate into gun manufacturers deciding to cut back on research and development, to hunker down and produce fewer new models of guns, then it could become a self-fulfilling prophecy. By failing to feed gun super-owners' insatiable desire for new and different models to buy, a failure to innovate on gun design could deprive gun buyers' desire to buy more guns.

Now, it's important to note that this is not yet happening. Data from S&P Global Market Intelligence show that, perhaps encouraged by 18 straight months of a boom market for guns, both Vista Outdoor and Smith & Wesson have roughly doubled their spending on R&D over the past few years (while spending is also up a bit at Sturm, Ruger). But if R&D spending begins to slip over the next few quarters, that could be a red flag, and a factor that could lead to further declines in guns sales down the road.

In gun sales as in all sales, the cardinal rule remains: "Give the customers what they want." Because if these companies ratchet back on R&D, and fail to innovate -- gun super-owners may decide they just don't want to buy at all.