At the CES 2017 technology show, NXP Semiconductors (NASDAQ:NXPI) announced a new long-term partnership with a Chinese heavyweight. Deals like these are at the heart of NXP's market-leading automotive computing operations, which in turn inspired Qualcomm's (NASDAQ:QCOM) pending $47 billion buyout offer.

NXP has a long history of providing car entertainment solutions for China-based car maker Geely Automotive Group (OTC:GELYF), but this partnership is going to the next level. The customer/supplier relationship will include a joint research and development operation aimed at tailoring NXP chips to meet Geely's exact technology needs.

If the Geely brand doesn't feel too familiar, you probably know its Volvo Cars brand better. Geely bought the storied Swedish marque from Ford (NYSE:F) in 2010 for $1.8 billion, and it may be planning to take Volvo public again.

The automotive group is hoping to become one of the top 10 car brands on a global level. Management is aiming for an annual production of 2 million cars by 2020, and the road to that exclusive level is paved with high-end target markets. Geely sold a total of 766,000 cars around the world in 2016. About 90% of these sales were recorded under the Geely brand in China, and Volvo stood for the remaining 83,000 units. To put these numbers into context, the largest car manufacturer in the world shipped 10.1 million vehicles in 2015.

Importantly, Geely sees high-end technology as a driving factor behind its ambitious growth plans. That makes NXP an important partner. On the flip side, Geely seems intent on including more than just the bare necessities of in-car technology in its upcoming Volvo and Geely models. For example, Volvo presented a self-driving car in 2016, and that platform is likely to ship with a heavy load of NXP's automotive chips. With NXP as an exclusive development partner, these sales volumes would make a significant difference to NXP's top and bottom lines. 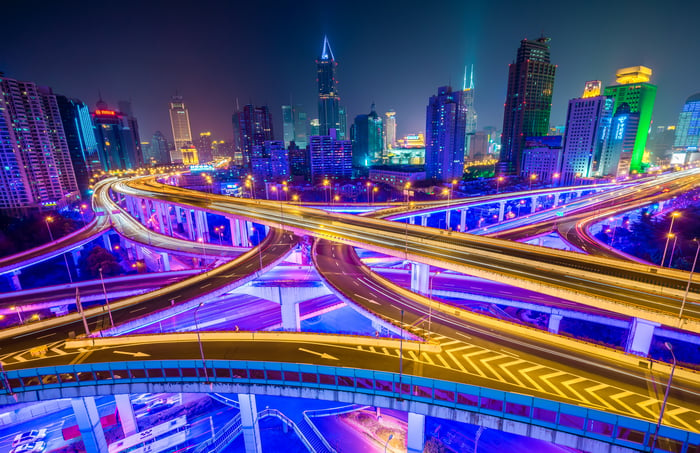 Of course, the Geely contribution makes a smaller imprint on the much larger combination of Qualcomm and NXP, which is the realistic endgame for NXP investors.

Even so, the Geely agreement is a signpost pointing in absolutely the right direction for NXP owners. The pending Qualcomm merger has not stopped NXP from jockeying for a stronger market position in its own right.

No, the Geely research partnership doesn't really change the investment thesis for NXP today. You should still expect to cash in your NXP shares at $110 each by the end of the year. But if you're interested in keeping tabs on the automotive computing market after the deal closing, it's another sign that Qualcomm is picking up a valuable asset, here -- and it might be worth a spot in your portfolio at the end of 2017.